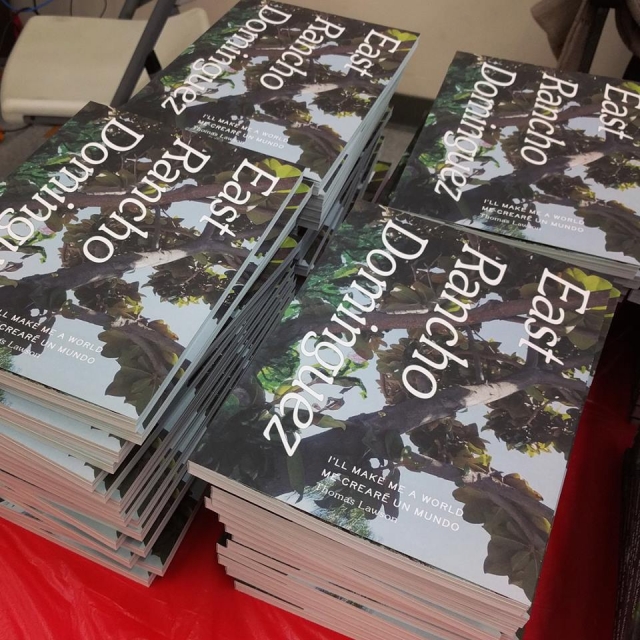 Just a few miles from Beverly Hills and Hollywood, the unincorporated towns of South Los Angeles may lack the recognizable identities of the iconic cities to their north. Yet, the enclaves of East Rancho Dominguez, Florence-Firestone, Lennox and Ladera Heights/View Park/Windsor Hills powerfully demonstrate the possibilities and challenges faced by 21st century urban neighborhoods.

With that in mind, in 2015, the Los Angeles County Arts Commission invited artists and writers from CalArts to explore the unique character of these lesser-known Los Angeles County neighborhoods. The result was Some Place Chronicles, a set of four bilingual (Spanish/English) books and related public events, profiling these South L.A. neighborhoods through the stories of their inhabitants.

The first three books in the series of four launched at the College Art Association’s (CAA) annual conference on Feb. 22 in Los Angeles, and all four are now available for free to the public at community centers and branch libraries in each of the featured neighborhoods. The result of an intensive process of community engagement, Some Place Chronicles explore themes of gentrification, education, community identity, demographic shifts and other distinctive local examples reflecting pressing national concerns.

“The goal is to celebrate the special character of these evolving neighborhoods,” said CalArts faculty, former provost and Some Place Chronicles lead artist Jeannene Przyblyski. “Numerous and varied engagements with the people who live and work in these communities, culminated in four unique books, created by four different artists/collectives, each containing explorations, documentation, and testimonies of what has been, and dreams of what might be.”

Some Place Chronicles books include: Przyblyski’s A Paseo Through Time in Florence-Firestone; I’ll Make Me A World by painter, writer, editor and CalArts School of Arts Dean Thomas Lawson on East Rancho Dominguez; photographer, video-maker and CalArts faculty Harry Gamboa Jr.’s Lennox: Colorful Place to Land; and A Place We Call Home: East of La Cienega and South of Stocker by Sandy Rodriguez and Isabelle Lutterodt, working as the cultural landscape painting/photography collective Studio 74, on Ladera Heights/View Park/Windsor Hills.

An example of creative place-making—a practice that brings artists, local residents and business owners, stakeholders and community partners together to assess the unique physical and social character of a place through creative activities, research and conversation—the project also strove to inform community development initiatives. A Paseo Through Time in Florence-Firestone has already been consulted in drafting the recent Florence-Firestone Comprehensive Community Plan, now under review by the Los Angeles County Board of Supervisors.

In spring 2015, CalArts offered a college-level course for undergraduates that explored the people, histories and cultures of these unincorporated neighborhoods. Public engagement activities and conversations with residents led by CalArts faculty, alumni artists and students were conducted through the fall of that year and led to the development of the project.

There have already been events held to celebrate the release of Some Place Chronicles in the publications’ respective neighborhoods. On March 17, Przyblyski’s book A Paseo Through Time in Florence-Firestone launched at the Florence Library. On March 22, Lawson distributed books at a Neighborhood Association meeting at the East Rancho Dominguez Community Center, in conjunction with the screening of a film project by Sara Daleiden on the same community.

On Saturday, May 16, Gamboa and Lawson will participate in a conversation with editor, writer and publisher Rex Weiner, followed by a book signing at Beyond Baroque Literary Arts Center in Venice, Calif.