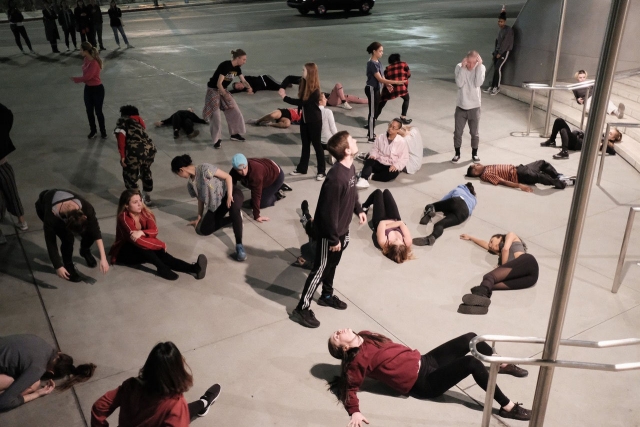 On Saturday, April 14, Hauser & Wirth will welcome student dancers from CalArts for two performances of Dimitri Chamblas’ HUMAN. The performances will be held within the public spaces of the Hauser & Wirth gallery and is compromised of multiple solos performed simultaneously.

Created by Dimitri Chamblas, the dean of the Sharon Disney Lund School of Dance, HUMAN explores one’s individuality through articulations of the singular dancer within the midst of a collective group. The piece, created in text through email exchanges, lives in language as much as through the movements of its dancers. This weekend marks the first performance collaboration between Hauser & Wirth and CalArts.

A similar impromptu dance experience, HUMAN, was performed last year by 70 dancers from CalArts on the steps and sidewalk surrounding the Walt Disney Concert Hall in Downtown Los Angeles in conjunction with the CalArts Winter Dance Concert.

Dimitri Chamblas is a curator and choreographer. During his career, Chamblas has collaborated with Jean-Paul Gaultier, Andy Goldsworthy, Jean le Gac, composer Heiner Goebbels, artist Christian Boltanski, choreographers William Forsythe, Lill Buck, Mathilde Monnier, Benjamin Millepied. In 2017, he launched Studio Dimitri Chamblas in Paris, a structure that hosts all of his projects and collaborations, including a duet with Marie-Agnès Gillot. Later that year, Dimitri Chamblas became the new dean of dance at California Institute for the Art in Los Angeles, where he currently teaches.

This event is all-ages