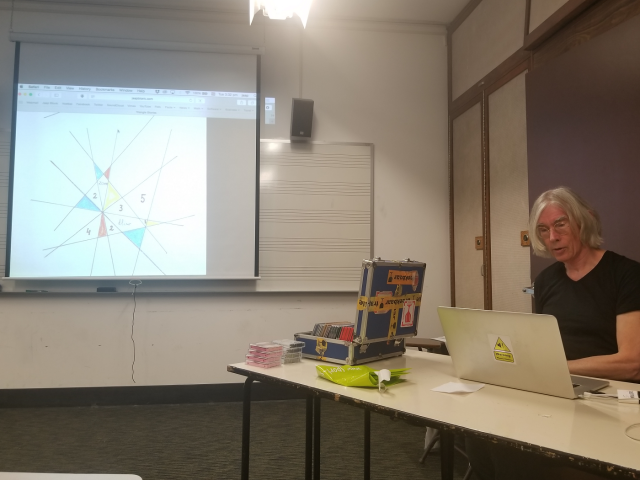 On Tuesday, March 20, CalArts hosted self-taught composer, performer and poet Jaap Blonk as part of The Herb Alpert School of Music’s Visiting Artist Series. Blonk is currently in the United States as part of a six-week tour and was primed to share his talents with the students and guests in attendance.

The self-taught artist began his career after abandoning his studies in mathematics and musicology to pursue poetry and music full time. It wasn’t until the late 70’s that Blonk discovered his potential as a vocal performer, at first reciting poetry and later on in improvisations and his own compositions. Blonk shared with those sitting in with the class that one of the initial poems he embraced as a live vocal piece was Seepferdchen und Flugfische (Seahorses and Flying Fish), which he performed for those in attendance as a demonstration of his technique.

According to Blonk, most of his material came from funny poems and nonsense pieces, with the majority initially coming from the German author, poet, and essentially the founder of the Dada movement, Hugo Ball. After moving to Amsterdam, Block listened to a lot of Jazz records and would sing along with the records, resulting in the creation of his own pieces that he would later use in his performances as well. Some of his performances in the early 80’s included opening for punk bands. One notable performance was an opening slot for The Stranglers where Blonk got called in as a last-minute replacement to warm things up for a crowd of over 2000 fans following the cancelation of the original opener. Most of The Stranglers fans in attendance voiced their displeasure with his performance by booing and throwing whatever they could to Blonk, but he still managed to finish and did get some applause from hundreds of those that did stick around that did find him intriguing.

Blonk did go into detail on what pieces he uses as part of his contemporary vocal techniques using “Electroshock Boogie,” and “Prime Minister I,” as some of his examples. He uses the size of the letters to reflect the sound dynamic and can also make the sounds proportional to the length of the letters. Other pieces that he uses are graphic scores that are also subject to interpretation such as a crossed out poem which could imply censorship and could also be performed proportionally to length, along with emotional context. A piece like “Prime Minister I” could be changed to President and is often performed by Blonk with displeasure based on who’s in office at the time of his live sets. Another technique he uses is inhaling sounds which can be tough on his vocal chords since it would dry them out. Blonk noted that some of his poetry performed live would sometimes scare people away. With the use of live electronics, the scope and range of his concerts have acquired a considerable extension.

He also mentions his fascination with consonants over vowels and would also create symbols that aren’t in the phonetic alphabet to produce the intended sound. For some of his readings, he could concentrate on a particular letter or group of letters instead of using the whole piece. Things like a big black dot would indicate the use of a lot of pressure in one’s voice to pull the sound off.

For those curious to see what sound poetry looks like, Blonk suggested checking out ubu.com or his website, jaapblonk.com, to see what he uses in his live performances. Blonk’s live sets usually consist of 90 minutes of material and also advised for those who would try his vocal techniques to use a Fisherman’s Friend lozenge before giving it a shot as well as staying hydrated for those of you adventurous enough to try it out.