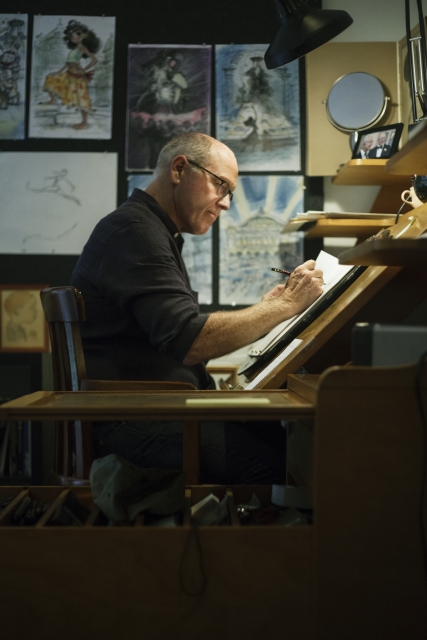 Make Believe: The World of Glen Keane opened at the Walt Disney Family Museum in San Francisco on March 8, 2018. Celebrating the work of influential Disney animator and CalArts alum Glen Keane (Film/Video ’74), the exhibition features highlights from Keane’s 40-year career with Disney, from The Fox and the Hound (1981) to Tangled (2010).

Regarded as one of the most prolific animators of the 20th century (The Wrap), Keane is responsible for some of the most unforgettable Disney characters, including Ariel, Pocahontas, Tarzan, Rapunzel, and the Beast.

Curated by Keane in collaboration with Michael Labrie, the museum’s Director of Collections and Exhibitions, Make Believe showcases hand-drawn animation and maquettes of Keane’s most iconic characters alongside pieces from Keane’s personal collection, including items from his recent collaboration with Kobe Bryant and John Williams on the animated short, Dear Basketball, for which he won an Oscar.

The exhibition also explores how Keane’s meticulous approach and embrace of technology helped usher in a period now recognized as the renaissance of Disney animation. Sketches and images from The Little Mermaid (1989), Beauty and the Beast (1991), Aladdin (1992), Pocahontas (1995), and Tarzan (1999)—all created during this period—will be included in the show.

The Museum will also present Keane’s Victory Dance, the first in a series of Tilt Brush artworks displayed in conjunction with Make Believe and upcoming exhibition Walt Disney’s Nine Old Men: Masters of Animation. Make Believe will close on Sept. 3, 2018.