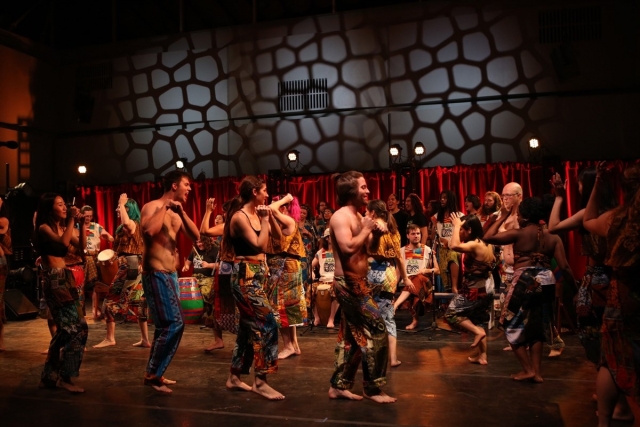 From Friday, April 27, through Sunday, April 29, 2018, the annual CalArts World Music and Dance Festival will transport music from around the globe to Southern California.

Presented by The Herb Alpert School of Music in collaboration for the first time with DW Music Foundation (DWMF) and Latin Percussion (LP), this year’s festival marks the addition of a second stage – allowing for double the amount of performances – as well as a vendor village featuring instrument makers, food trucks, and more.

With the collaboration of DWMF and LP, the 2018 festival will celebrate the power of world music percussion. Musicians including featured guest Flemenco percussionist Kassanda Kocoshis, CalArts faculty Latin percussionist Joey DeLeon, and Hands On’Semble headliner Randy Gloss – all LP artists – will make their festival debut alongside Taiko, West African, Brazilian, and Afro-Cuban drummers, and so much more.

Part of CalArts’ critically acclaimed Wild Beast Concert Series, concerts will take place at both The Wild Beast concert pavilion and on the LP Stage. Over the weekend, more than 100 CalArts students will take part in the festival, performing, as well as running tech, concessions, and more.

One of the first schools in the United States to offer degree programs in World Music performance, CalArts has presented this one-of-a-kind festival since the early 1970s, inviting celebrated international artists to perform with its own renowned World Music faculty and students.