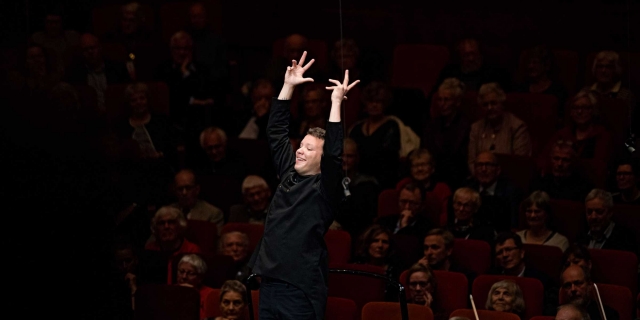 The Malko Competition for Young Conductors has awarded the 1st prize for its triennial event in Copenhagen, Denmark to CalArtian Ryan Bancroft (Music BFA 11 & MFA Trumpet Performance 13). Bancroft conducted Hans Christian Lumbye’s Champagne Gallop at sight, in celebration of his victory. Maestro Fabio Luisi, the principal conductor of the Danish National Symphony Orchestra, is the chairman of the 2018 edition of the Nicolai Malko Competition and will be the personal mentor to Bancroft.

The goal of the Malko Competition for Young Conductors is to identify and bring out those great young musical talents who will one day grace the podia of leading orchestras all over the world. More than 566 conductors from around the world applied to participate in the week-long, triennial Malko Competition for Young Conductors, with 24 conducting the Danish National Symphony Orchestra during the course of the competition in Copenhagen. The next competition will be held in 2021. It has been held every three years since 1965.