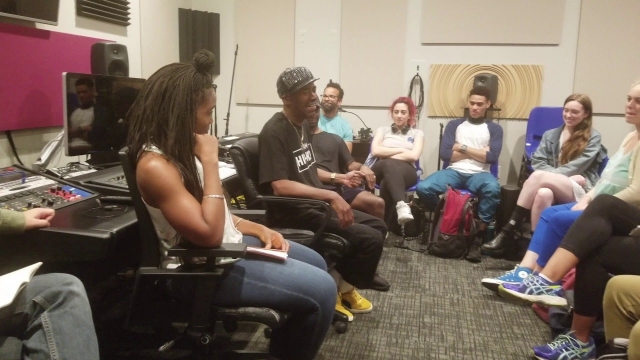 It’s not every day that a legendary rapper comes to campus to share the inner workings of his career that made him a star. Kurtis Walker, aka Kurtis Blow, spoke at The Herb Alpert School of Music at CalArts last week. As a special guest artist at CalArts’s Hip Hop Lab, Walker talked about his role in representing hip-hop culture and the history of hip-hop in New York.

At the age of 20, Walker became the first rapper to be signed by a major label. Mercury Records released “Christmas Rappin,” in 1979 which sold more than 400,000 copies and became an annual classic. Its gold follow-up single, “The Breaks” helped ignite a still-spreading international “rap attack.” He released 10 albums over 11 years, including Kurtis Blow, his full-length debut, and his second, the Top 50 Pop Album, Deuce, both of which became hits across Europe; Party Time, which featured a pioneering fusion of rap and go-go; Ego Trip, which included the hits “8 Million Stories, “AJ,” and “Basketball”; and in 1985, America. The innovative video for “America” received an MTV Monitor Award. From that album, the song “If I Ruled the World” became a Top 5 hit on Billboard’s R&B chart. Columbia/Sony recording artist Nas debuted at No. 1 on the Billboard’s Pop Album chart with a cover of the song in 1997. Walker was representing hip-hop in its infancy when nobody was.

The rapper turned minister and just an “overall fun-loving guy” talked about being around hip-hop which he describes as a society of young people who love and cherish the elements of the culture: rapping, scratching, breaking, and graffiti. Those were the first four original elements of hip-hop, which Walker acknowledged “that if you talk to people now, they’ll say there’s seven, or eight, or nine different elements of hip-hop from knowledge to fashion to beatboxing to pop-locking. So many other elements.”

Walker described to the attendees that it was a glorious time in the early 70’s going from one musical revolution to another. From the influences of the Motown sound coming from The Supremes, The Temptations, Stevie Wonder, The Jackson 5, and all the original soul music from the Motown Sound. That was later trumped by James Brown who came with his own musical revolution along with his drummer who played some incredible anticipating high hat and snare drum patterns that really inspired listeners not only to dance but dance like James Brown. The artist involved in the new dance movement came during the time of disco when people started going to clubs to hear music that made them want to dance. Walker described the time as one where dance became America’s favorite pastime following the Civil Rights Movement and the Hippie Movement of the 60’s to one where people went to clubs to dance their troubles away. They would dress up and pay around $5 – $10 to dance the night away.

Kids in Harlem and the South Bronx didn’t have the money to get into these clubs, or they were not old enough to get in so they went uptown to gyms, community centers, houses, and take over whole blocks to throw parties.

In the summertime, we would set up police barricades at the end of the block so that traffic couldn’t go through. Then the DJ would set up a sound system and steal the electricity from the light post. You had to have a bobby pin to go inside that base and had to be an electrician too. It was just an incredible time. Pretty soon people would bring out barbecue grills outside on the streets and start cooking food. You could smell the food from blocks and blocks and hear the music miles away. They would be having a block party on 167th street and you’re on 147th street a mile away so you were running off to the spot. People were hanging out the window having a good time, the vibe was all great and it was an awesome time. Every block had their own DJ pretty soon representing their neighborhoods and then the MCs came after that.

Walker mentioned that the original role of the MC was to help the DJ set up and break down their equipment after the gigs which would entitle the MC to enter the club for free. That was a plus because the MC didn’t have to pay to get in like everyone else, and if they were lucky, would be making announcements for the DJ inside the club. Occasionally they would sing a song or have a routine to inspire the crowd before the DJ’s performance. The MC is the master of the ceremony, no matter the size of the group or the size of the venue. MCs made sure that they were ready to entertain. The DJ was initially the boss since they controlled the tempo of the event.

New York at the time was all about dancing and dance battles where they would face off to the #1 song at the time, which would go on at midnight. That would kick off a dance battle within the circle aka the cipher with the winner becoming the hero of the neighborhood. That’s what inspired Saturday Night Fever. Guys competing in the dance battle were B-Boys, who danced to the breaks. Most important to the dancers were the drums and the bass which was unlike the kick drum of disco, a popular sound at the time. The break is the most important part of the genesis of hip-hop. It became the canvas that allowed them to paint, which helped the evolution of the dance movement. The break was usually only 15 seconds long and Grandmaster Flash understood the concept of the break. According to Walker, Grandmaster Flash, along with DJ Kool Herc, helped pioneer extending the break by making the 15 seconds of glory longer by buying two of the same records to extended the break up to 2-3 minutes. Instead of waiting for the song to get to the break like most DJs, Grandmaster Flash played an extended version where he only played the breaks, sometimes reaching 40 minutes, contributing to the evolution of turntablism. Since it was all beats, the MC had a more intricate role in adding dialogue during these battles. It became a changing of the guard.

In 1979, Walker got his start making records which were also around the time “Rappers Delight” came out. His first song “Christmas Break,” was turned down by 22 labels. Cory Robbins of Panorama Records loved the song, but his bosses hated it, so he quit his job to start Profile Records which signed Run-DMC. Walker’s first deal came from English AR director John Stains of Mercury Records who signed Walker himself. “Christmas Rappin” was originally released in the UK. The song had to sell over 30,000 copies in order for him to be able to make a second song (It sold 400,000). His next song had to see 50,000 copies before he could get a full record deal. The second single he released was “The Breaks,” which sold 840,000 records. Because the records were imports, it helped spread rap around the world. According to Walker, he was at the right place, at the right time.

Some of the advice that Walker gave students in attendance was to focus on practical study and research to get an edge. “I needed an edge by bringing the culture into the classroom and the classroom into the culture.” Walker attended Nyack College and City College of New York where he majored in Communications. He wanted to learn how people talked to each other which translated into him correlating rap with informative speeches which have an introduction, a body, and a conclusion. Walker’s speeches were more freestyle than anything according to the rapper. To Walker, freestyle was a type of rap that can be shaped to any form, like water. He experimented with mixing different form of music which translated in him becoming the first artist to mix rap with rock music before Run DMC did that in their hit single “Walk This Way,” with Aerosmith. Walker was also the first rapper to use a drum machine and the first MC to use a sample machine. He was an early advocate of using technology in music.

Walker also gave attendees the secret to making a hit. The three steps he gave was to get a good producer to clean up the bassline and make the song ready to go to play on the radio. The second step was to find a hit from the 1930’s and 1940’s and modernize it. “The Breaks” was inspired by an old hit from the 1920’s. Take an old hit, and make it new. The last tip to creating a hit that Walker gave was to stack the track.

Walker wrapped things up by emphasizing practical study and research as much as you can each day. “If I was asked to learn how to fly a helicopter, all I need is 24 hours and a YouTube tutorial, and I can do it. The world is yours!”