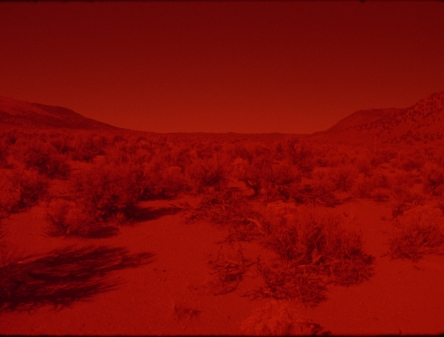 Still from 025 Sunset Red by Laida Lertxundi. | Photo from REDCAT.

From the screening program:

Laida Lertxundi (Bilbao,1981) works with moving image, photography and printmaking documenting the California landscape while engaging with questions of affect and subjectivity in relation to geography. Her main body of work is shot on 16mm in a process she calls Landscape Plus, which combines filmic records of people and places with an emphasis on diegetic sound and music, resulting in languid passages of cinematic language, bodily desire and existential awareness.

More often than not Lertxundi’s films avoid autobiography; however, 025 Sunset Red centers around her upbringing as the child of communist radicals. In the synopsis, she writes, “The film is a diaphanous, psychedelic foray into the domestic and the political, looking at ways that politics may erupt, shape a life, form a sensibility and become inscribed upon a body.” Last year, 025 Sunset Red played in several prominent film festivals, including Toronto International Film Festival and International Film Festival Rotterdam.

Tonight’s screening at REDCAT will be followed by a discussion with the filmmaker.