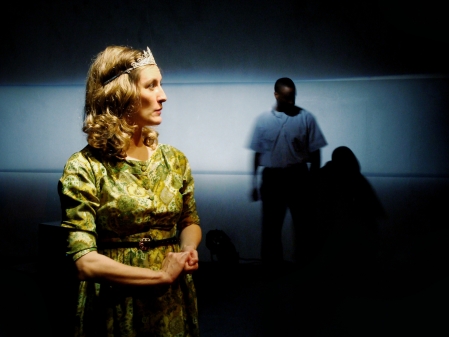 The world premiere of The Carolyn Bryant Project, created by former and current CalArts School of Theater faculty Nataki Garrett and Andrea LeBlanc, opens tonight (May 17) and runs through Sunday, May 20, at REDCAT in downtown Los Angeles. The production features actors LeBlanc and CalArts alum Jacob Gibson (Theater BFA 14).

Co-presented with and produced by CalArts Center for New Performance (CNP) and BLANK THE DOG PRODUCTIONS (BTD), The Carolyn Bryant Project re-examines the circumstances of the brutal murder of 14-year-old Emmett Till in 1955, and the ensuing silence of Carolyn Bryant for whom Till was murdered. The live-production is enriched by video imagery, historical transcripts and re-imagined encounters.

Emmett “Bobo” Till, a 14-year old Chicago youth, walked into a store in Money, Mississippi to purchase 5-cents worth of bubble gum from Carolyn Bryant, a 21-year old, white mother of two. Within a few days of this interaction, Till’s beaten and bloated body was found tied to a cotton-gin fan in a shallow part of the Tallahatchie River. Bryant’s husband Roy and his brother JW Milan would be acquitted of Till’s murder by an all-white male jury, only to confess to the murder a year later in a Look Magazine article.

LeBlanc is the Associate Dean and Co-Head of BFA Acting at CalArts’ School of Theater–she is also a founding member of BTD. She is committed to all aspects of performance and thrives in pioneering new performance and theatre aesthetics; her experience spans Feature Films, Independent Films, traditionally-based theater, experimental-based theater, webisodes, voice-overs, and radio. LeBlanc is an alumna of CalArts School of Theater.