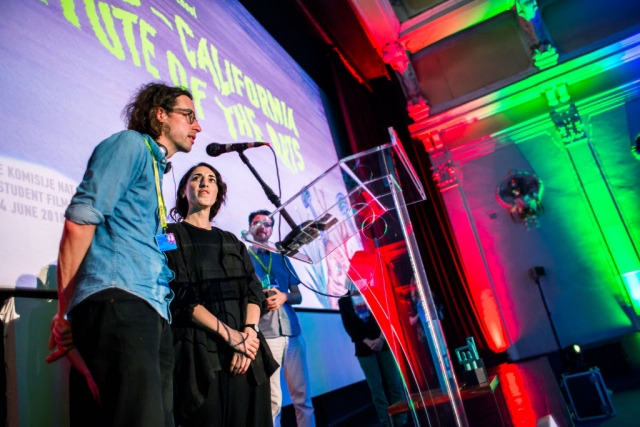 A special celebration of CalArts recently took place at the 28th World Festival of Animated Film (Animafest Zagreb) in Croatia. On Wednesday (June 6), CalArts was presented an award for Best Animation School, which was accepted by CalArts Experimental Animation faculty Pia Borg and Alexander Stewart.

After taking into account all of the submitted student films, the Selection Committee that featured Daniel Šuljić, Petra Balekić and Darko Masnec concluded that CalArts encourages diversity of techniques and originality in its students’ approach and selection of themes.

Furthermore, CalArts deserves the award for its continuous quality throughout almost six decades in which it nurtured an approach to animated films as complete audiovisual works and encouraged cooperation from students of various disciplines in the process of its creation.

As part of the 2018 awards celebration, Animafest Zagreb featured a special retrospective screening of CalArts’s animated films, which included the following 12 works:

Animafest Zagreb was founded in 1972, making it one of the oldest (and most beloved) animation festivals in the world. Each year, more than 300 films in a wide-range of animation styles are showcased for an equally diverse international audience.