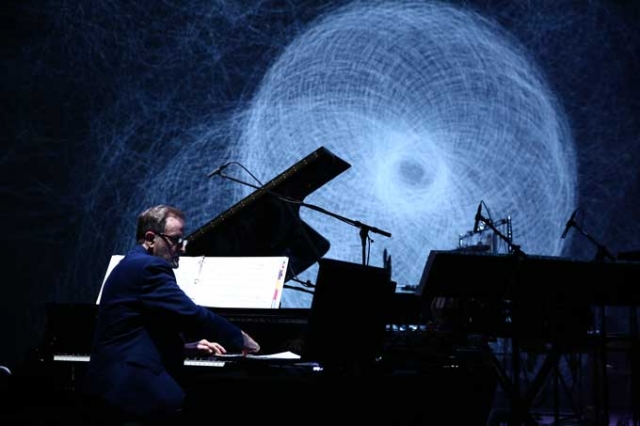 Courtesy of the artist

David Rosenboom’s music is well known for its imaginative application of new technologies. Rosenboom, the dean of CalArts’s Herb Alpert School of Music, is a multi-disciplinary composer and pianist, who has worked in interactive multi-media, new instrument technologies, and improvisation through cross-cultural collaborations since the 1960s, which led the New York Times to call him an “avatar of experimental music.” His music is celebrated for new techniques in scoring, such as generative algorithmic systems that engage scientific research and philosophy, including a work that created a musical interface for the human nervous system.

Rosenboom and his music will be traveling far and wide this summer. After a recent performance with the legendary Groupe de Researche Musicale in Paris, he is off to Argentina in mid-June, followed by a residency at the 22nd Annual Symposium Trstenice 2018 in the Czech Republic later in the summer.

I am very excited to present my music as part of the CETC’s concert cycle. It’s an incredible opportunity to perform my work internationally, and I believe that, now as much as ever, it’s vital for musicians, composers, and artists of all kinds to be engaged internationally whenever possible.

In Argentina, Rosenboom will present original works at the Center for Experiments at Teatro Colón (CETC) in Buenos Aires on June 22. The program will survey several decades of Rosenboom’s work, featuring compositions for piano, interactive electronics, and Disklavier, an acoustic piano outfitted with electronic sensors and electromechanical solenoids. The concert is part of CETC’s annual cycle that explores the world of solo piano music. This year the Center is placing a special emphasis on performer-composers whose work is both written and improvised. The CETC concerts take place once a month from April to December in the auxiliary space of The Teatro Colón, the renowned opera house that is considered to be among the five best concert venues in the world.

Though technology has unleashed new possibilities in communications and creativity, nobody has yet to figured out teleportation, so if you’re unable to make it to Buenos Aires or Trstenice this summer, you can also explore Rosenboom’s music online at Spotify, YouTube, and Vimeo.