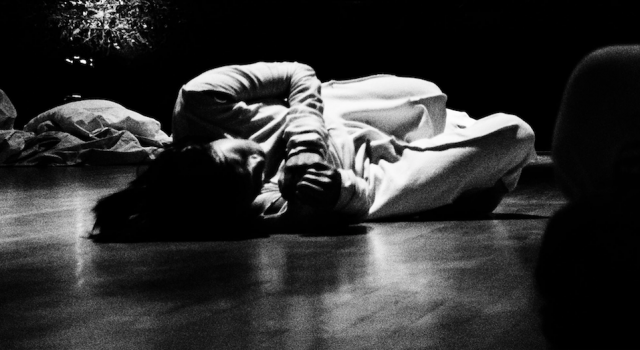 Khecari presents The Retreat: One Week, a 168-hour dance and music performance. | Photo by Christian DeKnock. Image from Facebook.

Next week, Khecari, a Chicago-based contemporary dance company directed by CalArts alumna Julia Rae Antonick (Dance BFA 03) and Jonathan Meyer, will be undertaking a study in duration. Their newest project, The Retreat: One Week is a 168-hour dance and music performance that begins on June 18 and runs through June 24. Audience members are encouraged to select variable times to attend, including the option of camping out to participate from beginning to end.

From the event program:

The Retreat is a world of fabric and light, sound and movement. It is dance performance and music concert. It is shared meals and participatory meditative movement practice. It is art sleep-overs and curated conversation. Sprawling and minute, mesmerizingly repetitive and chaotically unpredictable, it functions as a retreat, offering deep engagement and a state of beneficial boredom, positioning this often-suppressed form of attention as radical engagement with time and self.

The Retreat: One Week is a culmination of a project that Khecari began in 2014. Its initial practice titled Orders from the Horse originated with a series of questions about dance improvisation and the relinquishing of different levels of control. Eventually, their practice Orders from the Horse evolved into The Retreat, which includes workshops and performances with a full cast.

Antonick is a contemporary choreographer and dancer and has served as Artistic Director for Khecari since 2010. She has been awarded residencies at Djerassi, Ragdale, Hambidge, Links Hall, and The Chicago Cultural Center, and was presented in the 40th anniversary season at The Dance Center of Colombia College. She has received grants from the Chicago Department of Cultural Affairs, Illinois Arts Council, The Chicago Seminar on Dance and Performance, Driehaus, Donnelly, Cheney and Logan foundations.

Khecari was recently awarded a 2018 SMART Growth grant, which is part of a program from The Chicago Community Trust.

Check out a video of Khecari’s 2016 performance The Retreat: One Night below:

Khecari presents The Retreat: One Week