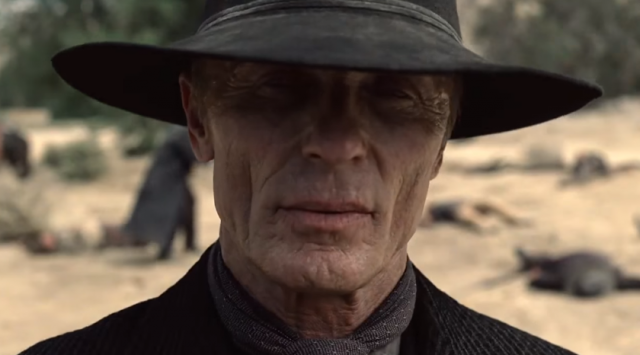 Season 2 of HBO’s hit series Westworld garnered 21 Emmy nominations this year including Best Drama and Outstanding Lead Actor in a Drama Series, which includes two members of the show’s cast: Jeffrey Wright for his portrayal of Bernard, and CalArts alum Ed Harris (Theater BFA 75) who plays William aka the “Man in Black.”

The science fiction series is known for its second-screen Reddit fanbase, which pores relentlessly over each episode offering a multitude of theories for every unanswered question. One of the biggest debates has always surrounded the significance and fate of the Man in Black.

Season 2 begins chronologically, in the direct aftermath of the Season 1 finale. The artificially intelligent “hosts” (androids) have been untethered from their original programming, which had  prevented them from harming humans. A violent narrative ensues as the robots become increasingly self-aware and fight to free themselves from the reign of human beings in the virtual reality amusement park Westworld.

Rather than shy away from the threat of death by robots, the Man in Black—a human—delves deeper into his violent, paranoid delusions, believing that somewhere in Westworld he will finally find the purpose and meaning of his life. The second season also offers more about the Man in Black’s life outside the park. In “Vanishing Point,” the episode submitted for Harris’ Emmy nomination, a flashback reveals one of the most traumatic moments in William’s life: his wife Juliette’s suicide. His daughter, Emily, finds him in Westworld and tries to help him see that they both need to stop blaming themselves for Juliette’s death.

Emily even tells him this, proclaiming, ‘It’s not too late for us.’ But when faced with the endless guilt, William does not even know how to touch it. So he turns it back to his game, one it seems he was more deliberately provoked into playing by Ford than we previously thought. But his game is always what it has been: a distraction. A denial. A way to not face the darkness of his own ‘stain’ and instead revel in it. So he lashes out and blames Emily, even though he knows it’s his fault. And he escapes into the unreality of his game once again. He shoots Emily dead, realizes his error, and cannot even face the consequences. He cannot kill himself. He takes a knife, literally digs into himself, his skin, wondering if he is even real.

While some have criticized this season of Westworld for its Byzantine plot, many agree on Harris’ skills. From the Entertainment Weekly site Fansisded:

Ed Harris’ portrayal of his internal struggle is, simply put, acting perfection. Not only does it raise questions for the viewer but you see a man, one of the most powerful in all of Westworld, wishing to relinquish his crown to be on equal ground again. In a way, posing the question is it better to be the king or the pauper in the end? Without consequence there is no joy. Ed Harris communicates it all effortlessly — sometimes without a single line of dialogue. All you have to do is look at William’s eyes throughout to see a man who’s lost his way via coronation.

In a post-credit Season 2 scene, series creators Jonathan Nolan and Lisa Joy give fans a taste of what’s to come. The scene reveals that somewhere down the line, Westworld ends up in ruins and the Man in Black, who has indeed died, is undergoing the process of being replicated as a host.

Although a release date has yet to be set, HBO has confirmed Westworld is renewed for a third season, with Harris signed on to continue his role as the Man in Black. In the meantime, he is hoping to get financing to direct his adapted screenplay of The Ploughman by Kim Zupan.

Check out “Westworld Season 2: Revisiting the Story of the Man in Black” from Time magazine below: