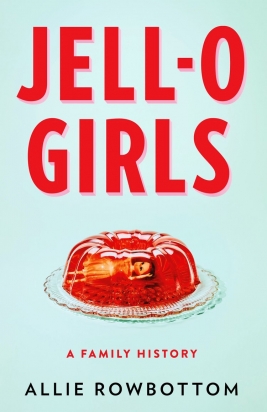 Jell-O—the brand name most associated with the gelatin-based treat—has a whopper of a backstory. And it’s Allie Rowbottom’s (Critical Studies MFA 11) story to tell.

In 1899, Allie Rowbottom’s great-great-great-uncle bought the patent to Jell-O from its inventor for $450. More than a century later, the product is part of the Kraft Foods empire, which made the 2018 Forbes World’s Most Valuable Brands list—estimated at $8.8 billion.

While the transaction would be a profitable one for Rowbottom’s family, and a notable deal in the American food industry, subsequent generations of the author’s family were haunted by tragedies that included suicides, cancer, alcoholism and mysterious illnesses.

Rowbottom’s mother Mary was diagnosed with cancer, the same disease that had claimed Mary’s mother’s life. Mary began to research family history and the “Jell-O curse” obsessively as a way to face her mortality head-on. Before she passed away in 2015, Mary began to send her daughter boxes of notes and research in hopes that Allie would write the history that she, unfortunately, would not.

The book has received stellar reviews, including from The New York Times:

Despite its title, this isn’t a bland tale that goes down easy; “Jell-O Girls” is dark and astringent, a cutting rebuke to its delicate, candy-colored namesake.

It’s also the kind of project that could turn unwieldy and even unbearable in the wrong hands. But Rowbottom has the literary skills and the analytical cunning to pull it off. Like a novelist, she can imagine herself into the emotional lives of others, while connecting her story and theirs to a larger narrative of cultural upheaval.

Now based in Austin, Texas, Rowbottom returns to Southern California to read from and discuss Jell-O Girls at an author event at Book Soup in West Hollywood on Aug. 14. She’ll be in conversation with CalArts Critical Studies faculty member Janet Sarbanes, one of several Creative Writing faculty that Rowbottom mentions in her “Acknowledgements” section, in which she also writes, “I have never been so happy and inspired and alive in language as I was during my time at CalArts.”