This morning, the Hammer Museum announced the recipients of three Made in L.A. 2018 biennial awards funded by philanthropists and art collectors Jarl and Pamela Mohn. Two of the three prize winners are CalArtians: Visual artist Lauren Halsey (Art BFA 12) will receive the prestigious $100,000 Mohn Award honoring artistic excellence, and artist and educator Daniel Joseph Martinez (Art BFA 79) will receive the Career Achievement Award ($25,000) honoring brilliance and resilience. Additionally, the Public Recognition Award ($25,000) will be given to performance artist EJ Hill.

Both the Mohn Award, which is among the largest international art prizes, and the Career Achievement Award are selected by a jury of professional curators. This year’s jury included Thomas J. Lax, associate curator of Media and Performance Art, The Museum of Modern Art; Liz Munsell, curator of contemporary art, Museum of Fine Arts, Boston; and Pilar Tompkins Rivas, director, Vincent Price Art Museum.

For Made in L.A. 2018, Halsey’s impressive architecture installation Crenshaw District Hieroglyphic Project (Prototype Architecture) is, as the title suggests, a fully realized prototype for a permanent monument that will be built as a collaboration with, and in, Halsey’s local community in South Los Angeles. Carved into the walls of the subtly psychedelic sculpture are hieroglyphic scenes of contemporary everyday life in Los Angeles infused with elements of ancient Egypt and Afrofuturism.

The spaces Lauren Halsey invites us into are fantastically futuristic and historically rooted celebrations of the real life experiences of her friends, family, and neighbors who stay in the iconic neighborhood of South Central L.A., where she grew up and still works.

Lauren’s installations are prompts for people to come together, both in the space of the museum where she observes, mourns, and celebrates the friends and neighbors who come in and out of the work, and in the middle of the city where daily life sustains this historic community. 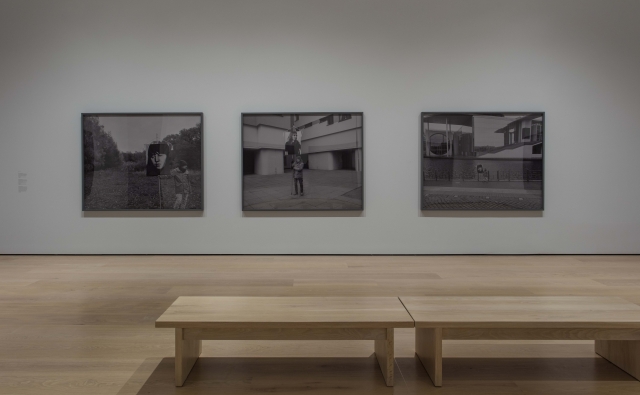 Made in L.A. 2018 features conceptual artist Martinez’s large-scale photographs from his recent exhibition I am Ulrike Meinhof or (someone once told me time is a flat circle). In this series, Martinez photographs himself at 80 locations along the length of the old Berlin wall. Within each photograph, the artist juxtaposes his self-portrait with an image of the German left-wing militant Ulrike Marie Meinhof (1934-1976). A founder of the terrorist Red Army Faction, Meinhof was arrested in 1972 and charged with numerous murders; however, while awaiting the trial’s conclusion, she hanged herself in her prison cell.

From jurist Rivas in the Hammer’s press release:

Daniel Joseph Martinez has had a tremendous impact on several generations of artists in Los Angeles, and has helped to shape the development of the art scene through his involvement in seminal art spaces in the city. He is an artist whose work and discourse are always profound, always question, and always push at the edges, whether it is through interrogations of power dynamics, global politics, or the nature of being. He is tremendously deserving of this award, and it is so wonderful to celebrate him at this moment.

Hill, the recipient of the Public Recognition Award, was selected by the museum’s 70,000+ visitors. The artist’s awe-inspiring performance, Excellentia, Mollita, Victoria, is an incredible feat of endurance in which he stands unmoving on a platform inside the museum’s galleries for every hour of every day that the Hammer is open to the public.

Made in L.A. is open through Sept. 2 and admission to the Hammer Museum is free.