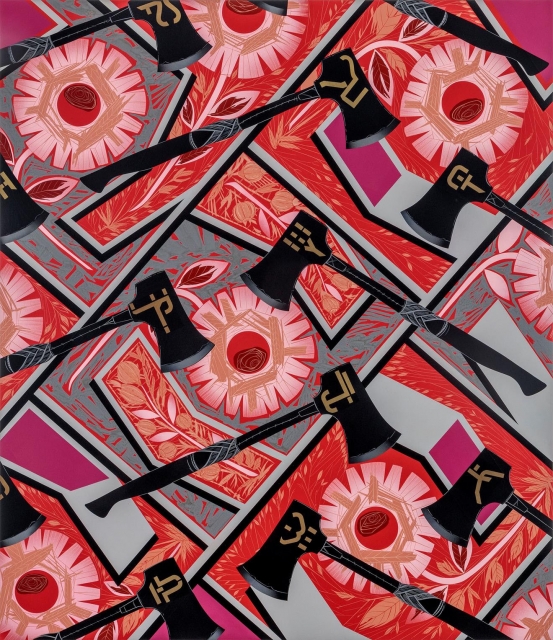 Regen Projects in Los Angeles opens Portraits of Textiles & Portraits of Humans, an exhibition of new paintings by artist, educator and CalArts alum Lari Pittman (Art BFA 74, MFA 76), on Sept. 15. Marking his eighth solo show with the gallery, Pittman’s new works include a series of 12 portraits of textile fabrics that will be arranged alongside their corresponding human portrait.

The textile works depict, and are named after, a specific type of fabric, such as brocade, taffeta, silk, et al.

Featuring dramatic shifts in scale, each individual textile depicts and is titled after a specific type of fabric, such as brocade, taffeta, silk, and toile. The overall composition of the textile portraits hone in on the intricate construction of the fabric and repeat their inherent pattern, evincing an internal logic unfolding to the edges of the canvas, and extending beyond the picture plane, seemingly ad infinitum. Despite their titles, the individualized aesthetic of Pittman’s images evoke a meaning that belies facile comprehension. The reiterated patterns evident in the textiles are punctuated with a coded language existing simultaneously amongst a top layer of tropes of violence in the form of scythes, tomahawks, fish hooks, and hedge clippers. Each discernible tool serves as an instrument of activization in the autonomous world of each image.

Similar to the portraits of textiles, Pittman’s images of humans –Pathos, Ethos, Logos, Kairos– indicate a cultural moment and a concern with hyper individualization as a byproduct of late capitalism. Eschewing simple classification and definable genders, each subject is rendered in a specific color palette that is in direct conversation with their partner textile, implying an act of courting or avarice. The high level of ornamentation of people and their textiles stands in contradiction to the depicted fatigue on their faces. The mutability between animate and inanimate creates a continuous shift in focus, presenting a dematerialization of the background and the subject’s face, allowing the fore and backgrounds to become one.

Pittman, a distinguished professor in UCLA’s Department of Art, is known for his complex, large-scale, collage-like paintings. His works are included in the permanent collections of museums worldwide, including The Broad, LACMA, MOCA and The Hammer in Los Angeles; Corcoran Museum of Art, Washington, D.C.; Sammlung Goetz, Munich; Harvard Art Museums, Cambridge, Mass.; Museum of Contemporary Art Chicago; MoMA and The Whitney in New York; and the San Francisco Museum of Modern Art; among others.

He has also been included in four Whitney Biennials and has had numerous solo exhibitions throughout the world.

Pittman’s work can currently be viewed through Sept. 30 in the group show, Give a damn, which includes art from Skidmore College’s Tang Teaching Museum collection “by artists who, quite simply, give a damn about the world around them and the people in it.” He’s also featured through Nov. 4 as part of MoMA’s group show, The Long Run, which showcases works by artists who continued to experiment and evolve long after their breakthroughs on the art scene. Also featured in the MoMA show are other CalArtians John Baldessari (Chouinard 59) and Ed Ruscha (Chouinard 60).