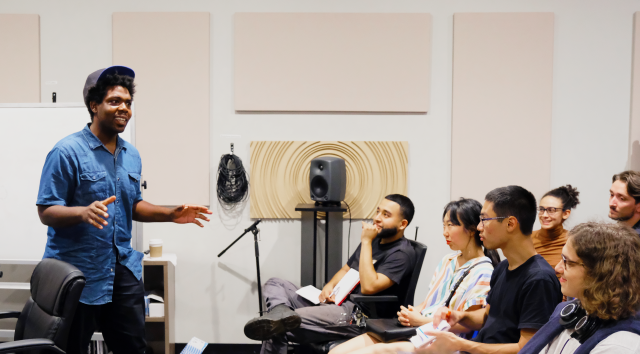 CalArts alum Austin Antoine (Theater BFA 13) returned to campus on Sept. 28 to teach students in the Hip Hop Lab a little bit about freestyle rapping—something he knows quite a bit about, having broken the Guinness World Record for Longest Freestyle Rap back in 2013.

To get the ball rolling in the lab, Antoine divided the students up into pairs and had each person talk to their partner for 30 seconds without pausing. Afterwards, the students responded to the exercise, pointing out the challenges of spontaneity and how it was important to focus on their partners while they were speaking, rather than planning what to say next.

In the clip below, watch Antoine give a short freestyle demo and learn what the differences are between ciphering and battling.

Antoine also spent time reflecting on his experience at CalArts, and how he took advantage of being able to collaborate with classmates in different programs, particularly with The Herb Alpert School of Music.

Watch the excerpt below to learn about how Antoine challenged himself during his last year at CalArts to set a Guinness World Record.

A performance artist who blends music, poetry and theatrics, Antoine now tours regularly for musical collaborations, freestyle performances and rap battles. His other contributions include being a host of creative workshops and a teaching artist and performance coach with Get Lit Words Ignite. His work can be seen with Sofar Sounds, TeamBackPack, ThatLowd, Joomanji and TheyGotTime.

Antoine will be performing in and around California in October. For more information about his upcoming shows, check out his Facebook page.