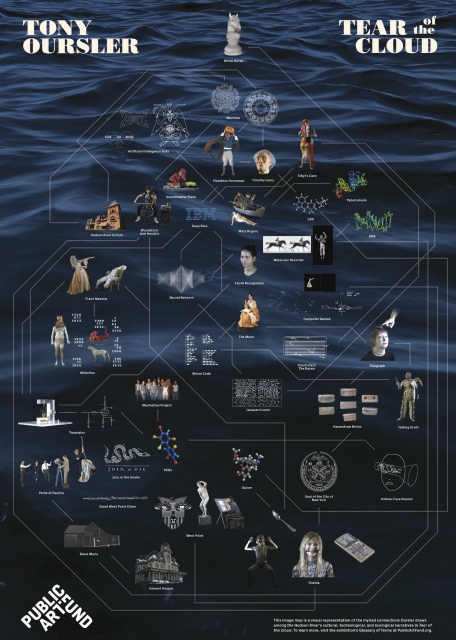 Tony Oursler’s site-specific ‘Tear of the Cloud’ is on view in New York through Oct. 31. | Flowchart image: Courtesy of the Public Art Fund

Tear of the Cloud is both a visual and auditory work that uses an eclectic array of historical and technological reference points, from the Hudson River School (the 19th century American art movement of landscape painters) to social media bots, The Headless Horseman, IBM’s chess-playing computer Deep Blue, the 19th century utopian society of Oneida, and experimental music from the South Bronx and Lower Manhattan. A companion Glossary of Terms helps identify the key references in the work.

In a recent interview with Garage Magazine about Tear of the Cloud, Oursler explains how it relates to some of his other site-specific projects:

My first Public Art Fund project in the park, called “The Influence Machine,” had a long run up to it in which I got into researching what I thought of as a shadow history of modern technology and telecommunication. I was really fascinated by how a lot of inventions like the telegraph or photography became codified industrially, commercially. Before they did, they were adapted by people for all sorts of interesting things, such as spirit photography. I wanted to think of this new work as a companion piece to that one, but also for it to have its own world. The Hudson Valley became a main source of inspiration this time around, but the focus is still on communications technologies up through the development of the internet to what it has become now, as well as artificial intelligence. The Hudson Valley is the through line, it was really the first Silicon Valley given that the punch card was developed there by Herman Hollerith and IBM started there as well.

Oursler has a long-standing connection with the river, growing up along its banks in Nyack, New York. The current exhibition even takes its name from the highest water source for the Hudson River in the Adirondack Mountains called Lake Tear of the Clouds.

According to the Public Art Fund, “Oursler’s title sets the tone for his new site-specific commission, evoking the flow of the river and natural phenomena; suggesting both the tragedy and success of the stories of the valley; and offering a nod to new technological advancements, such as today’s ever ubiquitous digital ‘cloud.'”

Tony Oursler: Tear of the Cloud

Riverside Park South
Between 68th and 70th streets, along the Hudson River
Enter at West 68th Street and Riverside Boulevard

On view 7-10 pm, Tuesdays through Sundays