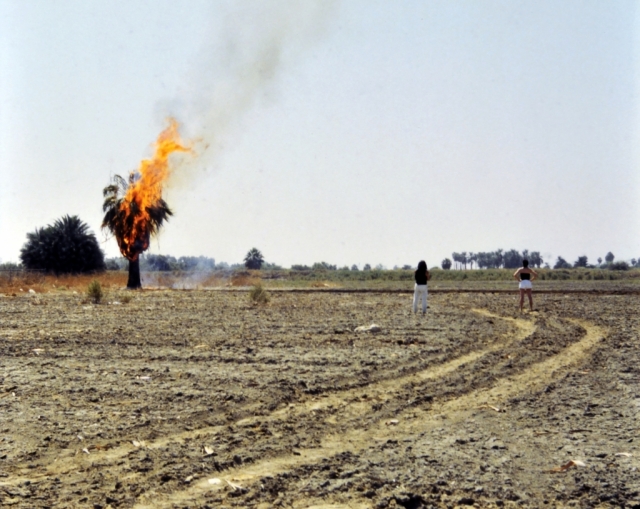 Film still from Queen of Diamonds by Nina Menkes. | Image courtesy of the artist.

School of Art faculty Smith’s early feature Drylongso premiered at the 1999 Sundance Film Festival and won an Independent Spirit Award. Set in Oakland, Calif., the film is a coming-of-age story about Pica, a young art student who comes from a dysfunctional family. To cope, she begins photographing young African American men believing they are an “endangered species.” Some of the men she photographs coincidentally become victims of a neighborhood serial killer.

The film will be presented at AFI Fest on a new 16mm print, courtesy of the Academy Film Archive.

Menkes’ Queen of Diamonds also premiered at Sundance Film Festival in 1991, making Menkes one of the first female filmmakers in dramatic competition. The film was named one of the Year’s Ten Best by the Los Angeles Times, Film Comment, The Atlanta Art Papers as well as many other publications. Shot on location in Las Vegas, Queen of Diamonds follows the everyday life of an alienated blackjack dealer played by Menkes’ sister, the actress Tinka Menkes.

The 35mm film was restored by the Academy Film Archive and The Film Foundation, with funding provided by the George Lucas Family Foundation.

The other four films in the program are: The Cruz Brothers and Miss Malloy (1980) directed by Kathleen Collins; The Juniper Tree (1990) directed by Nietzchka Keene; Meetings of Anna (1978) by Chantal Akerman; and Nitrate Kisses (1992) by Barbara Hammer.

Preceding Menkes’ film screening on Saturday, Nov. 10, she also presents the talk Sex and Power: The Visual Language of Oppression. The illustrated lecture is comprised of film clips by a number of established directors including Orson Welles, Spike Lee, Francis Ford Coppola and others. Menkes then examines how the shot design (lighting, framing, blocking, camera movement and camera angles) works to formally disempower women on screen.