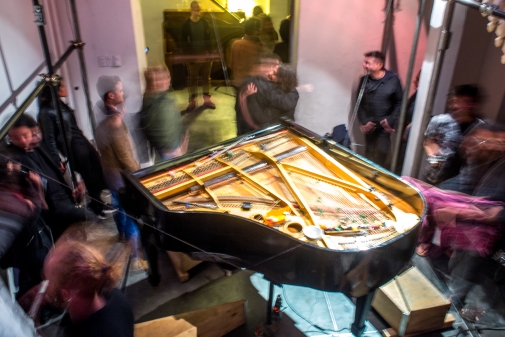 Featured in the Los Angeles Times as this week’s “not to miss” event, Pura Entraña features Piano Suspendido, Naranjo’s installation of a piano with manipulated strings and keys suspended above the stage.

Developed during a residency at The MacDowell Colony in New Hampshire, Pura Entraña is an exploration of concepts such as the body, syncretism, vulnerability and connectedness. According to Escobar, “Although the piece is highly structured there is emergence and openness brought forth from the inside of the musical landscape. And the improvisational elements allow for a renewal of possibilities and for there to be a freshness and risk to the sound itself.”

Escobar first met Naranjo in 2015, at Bucareli 69, an independent performance venue in Mexico City directed by Naranjo. After being introduced to his work and Piano Suspendido, Escobar began collaborating with him and Der Bauch.

In an email Escobar spoke about Piano Suspendido:

For a few years back, Jerónimo has been working with extended instruments, extending the acoustic and color possibilities of different stringed instruments. His work has always struck a chord with me, and after playing with Piano Suspendido I realized how many connections it had with my own work and acoustic/visual poetry.

Originally, the piano was only suspended 50 cm above the floor to create a floating acoustic resonant box out of the body of the piano. However, for the performances at REDCAT the piano is elevated 6 feet, creating a magic realism image and sound that transforms the instrument and allows it to become a multiple of signifiers.

Check out the video below to see how Escobar and Der Bauch activate Piano Suspendido: