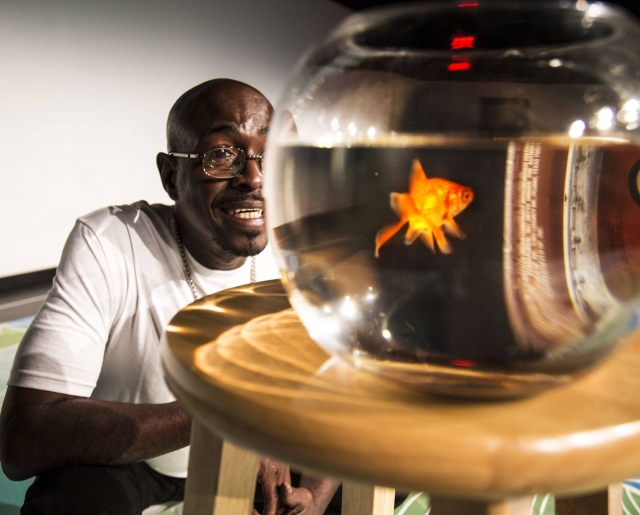 Theater artist Kaneza Schaal first came to REDCAT as a performer with New York-based ensembles, The Wooster Group and Elevator Repair Service. She now returns this week (Nov. 15-17) as the director and co-creator of JACK &, a multimedia comedy of errors that examines how one man reclaims his life and lost years after prison.

The lead character, Jack (Cornell Alston) returns home to bake a cake for his wife after working the night shift at an industrial bakery. From there, he enters a dance that crosses back and forth between dreams and reality.

Schaal first met Alston when she watched him perform in the title role of August Wilson’s Ma Rainey’s Black Bottom at the all-male Fishkill Correctional Facility in New York, where Alston was serving 33 years. The piece is part of an ongoing personal process for Alston, as acting helps him work through his transition to civilian life.

The performance draws on aspirational class stories like those in The Honeymooners and Amos & Andy; the paintings of Agnes Martin, Ellen Gallagher and Ruth Azawa; tigers in Harlem; real and imagined entering society ceremonies like Cotillion balls; and markers of transition from John Canoe traditions, to the mirroring and mimicry found in African American dance pageantry of the late 19th Century.

The show’s producers have a limited number of complimentary tickets available to the CalArts community and the public for JACK &’s three-night run. Email ticket requests to redcatpr@calarts.edu. Tickets will be distributed on a first-come, first-served basis.

And in the spirit of JACK &, free cake will be served after each performance at REDCAT.