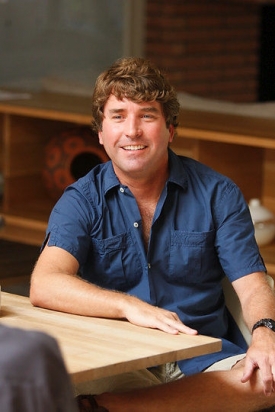 The long-running Nickelodeon show aired its first episode on May 1, 1999, and is currently in its 12th season. SpongeBob SquarePants follows the aquatic adventures of an ever-optimistic sea sponge and his pals who live under the Bikini Atoll. Its childlike sensibilities and wry humor made it the most widely distributed property in Viacom history, seen in more than 208 countries.

Hillenburg’s background in marine biology, love of the sea and all its creatures led him to create the comic book, The Intertidal Zone, which he used to teach students at the Orange County Marine Institute in Dana Point, Calif. His love of drawing and animation soon led him to the MFA Program in Experimental Animation.

Since its inception, SpongeBob has spawned two feature films The SpongeBob SquarePants Movie, which Hillenburg co-wrote and directed, and The SpongeBob Movie: Sponge Out of Water. Last year, SpongeBob: The Musical opened on Broadway to great reviews and earned a dozen Tony Nominations.

Hillenburg is being remembered by fellow CalArtians, artists, animators and fans for his wit, humor and his memorable creations.

Here’s what people are saying:

The world lost a brilliant voice, and CalArts lost one of its dear friends Monday, with the death of Stephen Hillenburg. His interest in tide pools and passion for painting merged at CalArts to fuel his most well-known creation, SpongeBob, who resides in the imaginations and hearts of millions worldwide. There is more joy, more camaraderie, and more laughter in the world because of SpongeBob, and for that we will always be eternally grateful to our brother Stephen.

Goodbye Stephen Hillenburg, thank you for the shared laughs with my kids through the years. We’re all Goofy Goobers thanks to you.

“ Wow what a unique and fantastic character Steve created!( The Biggest cartoon character in the world) !!!!It was my pleasure and honor to be in Spongebob the Movie and to share some great laughs with this gentleman.. Shocking Loss ! “ To this day I am stopped and flattered by people and kids who have seen me in the film” #nickelodeon #spongebob

I am very sad to hear about the passing of Steve Hillenburg after a battle with ALS. SpongeBob was obviously a huge presence during my many years at Nickelodeon (all the way back to the Zim days), and throughout the American TV animation industry. I only had a few brief interactions with Steve over the years, but he was always humble, and very kind to Mike and me. The last time I saw him was a couple years ago at a nice group lunch with some mutual friends from the SpongeBob crew. I was a definite outsider in the bunch, but Steve graciously picked up the whole bill. When I was recruited by Eric Coleman to pitch a series in 2002, he told me he wasn’t looking for the “million dollar idea,” rather, he was looking for people like Steve Hillenburg — in their creative capacity, and also in how they could run a production and work in a positive, collaborative manner. I have great respect for Eric and he always spoke of Steve in the highest regard. My condolences to Steve’s family, friends, coworkers, and many fans. ???? #stevehillenburg #spongebob

I remember bright-eyed, younger me during my first week of school at Calarts in the Experimental Animation program thinking " Wow, I can't believe I'm in the same program Stephen Hillenburg went to! Maybe one day I can direct cool shows too!" pic.twitter.com/tjamWQhQbX