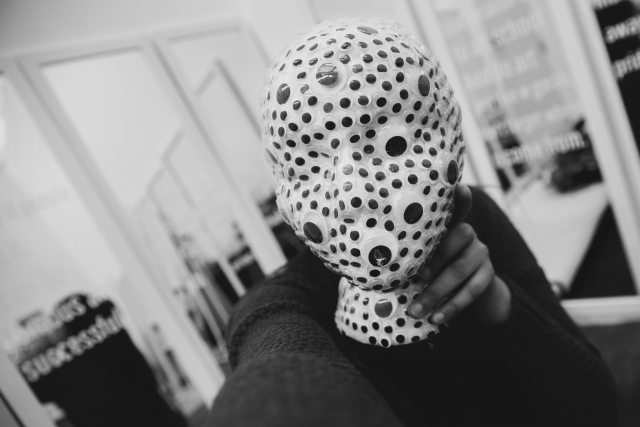 All Eyes One Me by Jaya Kang (Art BFA 20). | Photo by Rafael Hernandez.

The inspiration for All Eyes On Me, Jaya Kang’s (Art BFA 20) recent third year mid-residency show at CalArts, was a collection of craft kit “googly eyes.”

After the show, we had a chance to chat with Kang about her work. 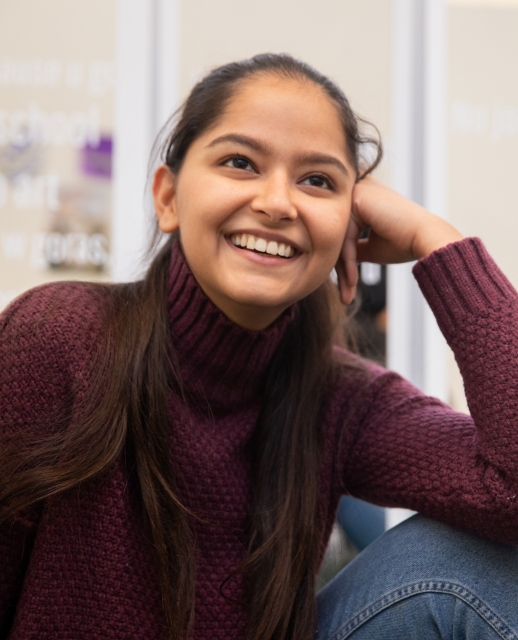 Kang: When you walked in, the show was divided into three parts, but it had an overlying theme that spoke about making art for the other. I was thinking about three specific external influences or pressures in my life: a financial pressure; a pressure from my culture and family; and institutional pressures.

Having chosen to invest in my education, I felt the financial pressure generating this fear that I needed to mold my art a certain way to find success and make that investment back. And then there’s the pressure from my family, who are very supportive of me pursuing art, but they have an expectation that art ought to look a certain way. I do a lot of performative and video art that doesn’t reflect their view of traditional fine art, so I feel this other pressure to prove myself to my family.

At CalArts, I found myself at odds with the idea of “pure art” or making work in a headspace that is entirely removed from these aforementioned external influences. Most of the examples of the artists making pure art are people who are not dealing with the circumstances influencing me like being an immigrant, a woman and a person of color. I’m still trying to deal with these things even on a basic level, trying to figure out how to stay in this country after I graduate. 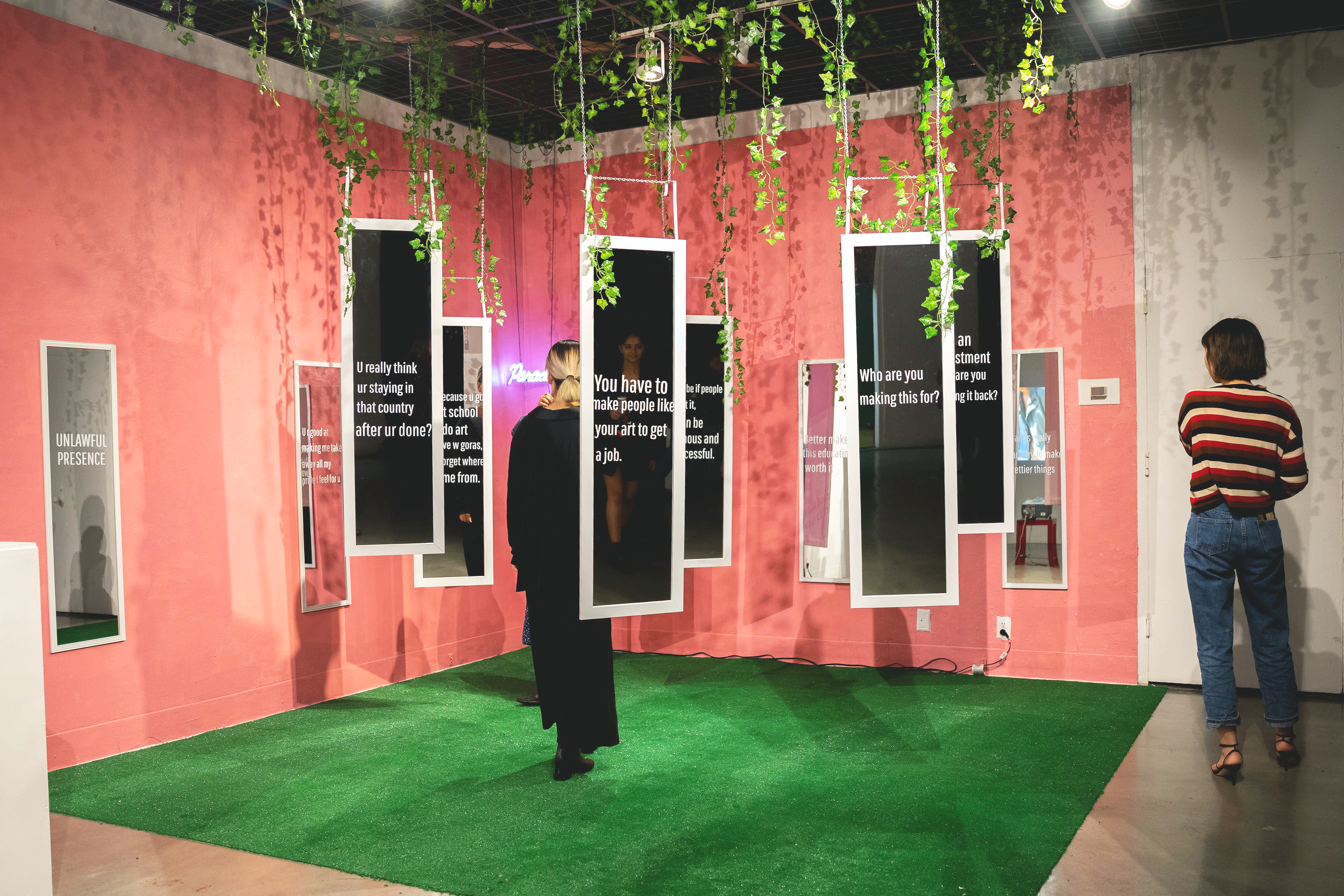 One element of ‘All Eyes On Me’ was inspired by spaces designed for social media. | Photo: CalArts

24700 blog: Is social media something you were thinking about too while making All Eyes On Me?
Kang: Definitely. I was thinking about social media and popular art. I wanted to adopt a specific Instagram aesthetic to lure people into the installation, and then after the initial attraction have them confront other things and go deeper. I wanted to play off of that sense of escape that is built into commercial attractiveness and make something that could be photographed easily like the pink wall and the neon ‘paradise’ sign. I really enjoy making videos and sculptures that aren’t necessarily aesthetically pleasing, so it was almost like trying to balance that out by bringing this photographable element to the installation.

My references were mainly Instagrammable places like the Museum of Selfies, the Ice Cream Museum and 29Rooms. But instead of entirely dismissing the kind of artificial construction that takes place on social media, I started to look at how it could be a result of people feeling different external pressures. 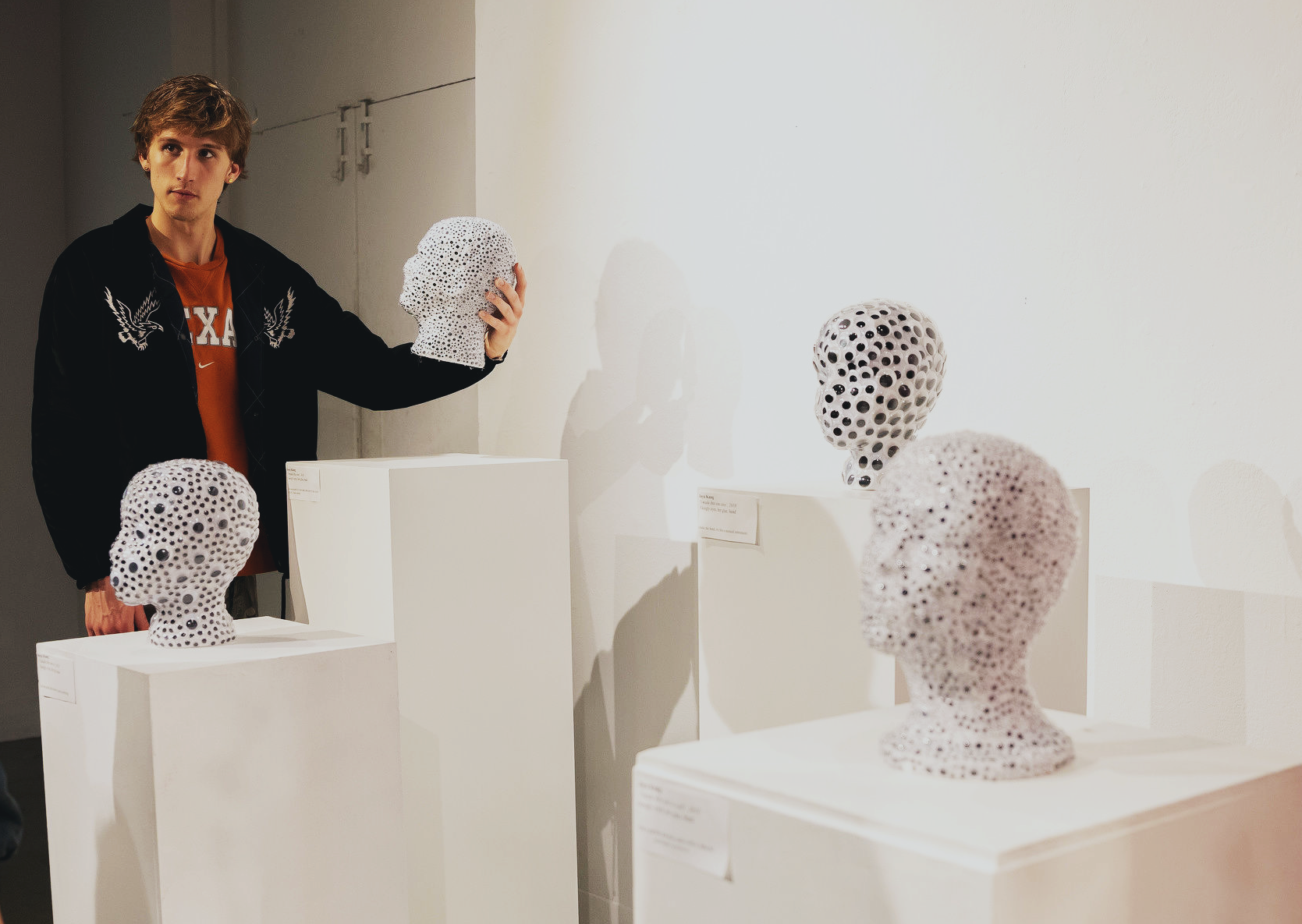 Kang wrote title cards for each sculpture encouraging people to interact with the art. | Photo: CalArts

24700: Tell us more about the googly eyes.
Kang: The googly eyes were definitely the initial inspiration for the exhibition. Two years ago, I bought a bunch of googly eyes in response to feeling like there were a lot of external pressures influencing me. The theme came out of this frustration I was trying to deal with.

I went to [an L.A. museum] and started putting googly eyes on sculptures. As a kind of satire, I started recording videos of me standing in front of the sculptures talking about each piece like it was my artwork. I was thinking about who has the right to claim artworks and claim the other, as well as who can claim my artwork. So the googly eyes became representative of this other.

I did another video like this at LACMA where I dressed up like an explorer, who’s visiting from the future, walking through the museum fictionalizing the meaning of different artworks. That came from my desire to try to flip the script on how western forces and colonial powers have written history. For example, growing up in India, a lot of my textbooks were written by British colonials.

With the googly eye sculptures in my installation I wanted to make something that would immediately dispel the feeling of intimidation that is often associated with art galleries. Each sculpture had a title, which were ‘I made this one,’ ‘I made this one too,’ ‘I made this one also’ and ‘I made this one as well.’ Along with the names and material list it had an instruction at the bottom stating things like ‘You can touch it if you want, don’t worry if the eyes fall off, I have more’ and ‘Feel the head, the texture is really satisfying,’ ‘Shake the head, its like a musical instrument’ and ‘Find a partner and play catch with it, haha jk. you break it you buy it.’

Art makes me want to interact with it and be a part of it in some ways, so I wanted to allow the viewer to be able to do that with these sculptures. Its tactile nature and the sounds it created were very important. It was interesting to see that even though I had those title cards many still didn’t believe that they could touch them since they were placed on very traditional pedestals with intense lighting. Also, I was running around the [museum] touching other people’s art so its only fair I let others touch mine. It would be hypocritical of me not to let them!

24700 blog: What artists inspired you while making this work?
Kang: I had an Independent Study with School of Art faculty Audrey Chan and she encouraged me to look at Adrian Piper’s work because she uses text in a really funny and confrontational way. I started to look at her work to figure out how to use direct text to speak about cultural identity.

24700 blog: What has your experience at CalArts been like?
Kang: I feel like every day is a personality building day for me because CalArts is such a characteristic place with its own set of values. I’m challenged to have to confront these values and see where I stand between them. These are very formative years, a time where I’ve stepped out of my comfort zone and for the first time I’m forming an identity outside of my family and the society I was raised in.