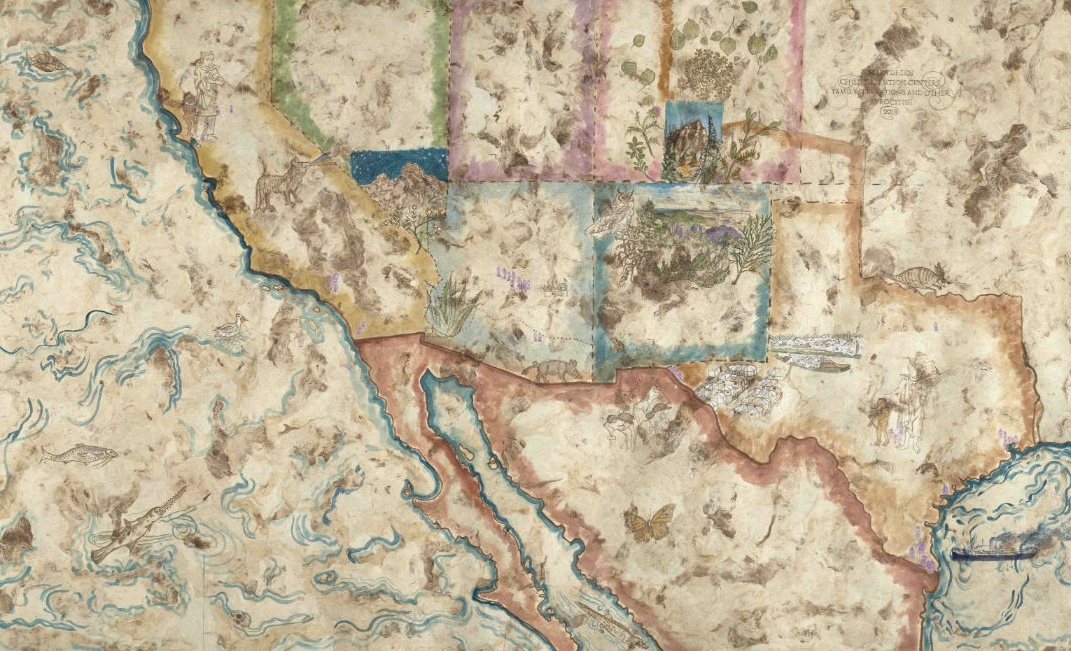 In Codex Rodriguez – Mondragon, which is currently on view through Jan. 27, 2019, at the Riverside Art Museum (RAM) in Riverside, Calif., the artist uses a 16th century text as its inspiration. Florentine Codex: General History of the Things of New Spain was written by Friar Bernardino de Sahagún and features more than 2,000 pages of illustrations and documentation. The manuscript provides a richly detailed account of the culture, history, economics and ritual practices of the Aztec people and the Spanish conquest of Mexico. 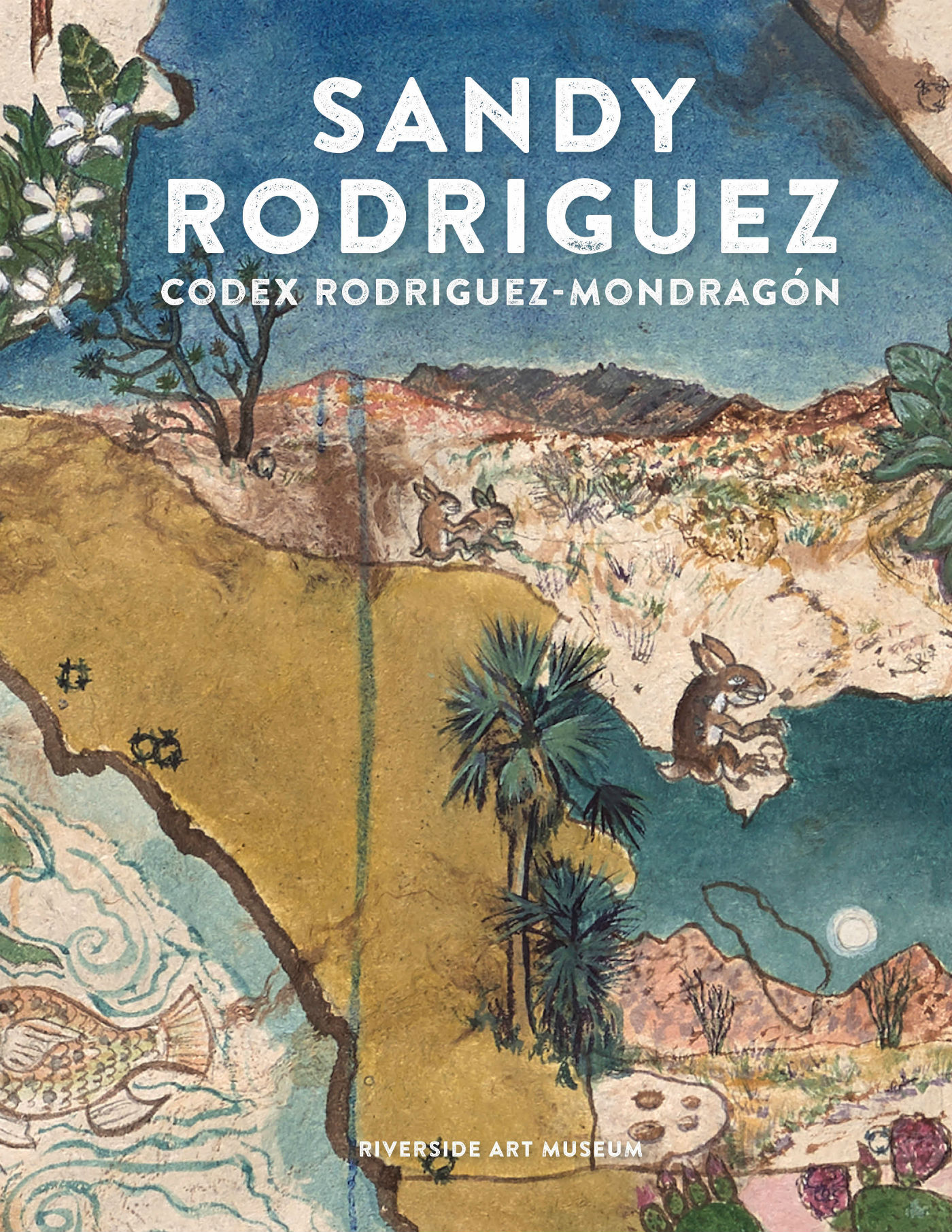 Rodriguez painstakingly followed guides and recipes in the Florentine Codex, to recreate the colors and styles for Codex Rodriguez – Mondragon (her parents’ surnames). The series of maps and paintings use historically accurate materials to document current boundaries and geography, animal and plant species, along with reference to today’s politically charged climate.

From the Riverside Art Museum:

Rodriguez spent 2017 and 2018 in the field researching, testing, cross referencing, and producing artworks with Mexican and Pre-Colombian materials. She has painstakingly recreated colors indigenous to the Americas and painted on amate, a handmade paper made from the bark of wild fig and mulberry trees. Drawing heavily on Book 12 of the Florentine Codex, which documents the Spanish invasion and conquest of Mexico, Rodriguez makes powerful historical and visual linkages to present day ICE agents in helmets and body armor capturing residents and activists in communities and workplaces. She also examines scenes of Spanish vessels and weapons, and presents them as 2018 US Customs Border enforcement vehicles used to capture residents. These include unmanned drones, marine vessels, and land and air vehicles.

“I wanted to intensely focus on the colors native to the Americas,” Rodriguez said during a phone interview. After spending 20 years in museum education and Western European history, Rodriguez, who was raised in San Diego, Tijuana and L.A., added that she didn’t “know anything on the history of color from my own culture.”

By linking the past with the present political state in her work, Rodriguez said she is “decolonizing my art practice.”

In addition to the RAM show, Rodriguez is also part of the group show, Here, on view at the Los Angeles Art Municipal Art Gallery in Barnsdall Park though Jan. 6, 2019. Each of the artists selected — including CalArtians Henry Taylor (Art BFA 95), Gloria Galvez (Art MFA 16) — examined the sometimes ephemeral nature of boundaries, from the physical and geographical to the “conceptual and imagined boundaries and boundlessness, in and around Los Angeles.”

In the work featured at LAMAG, Rodriguez uses colors and pigments native to L.A. and maps out state-sanctioned violence in the Los Angeles area from colonial times to the present.

In Carolina A. Miranda’s detailed profile of Rodriguez in a recent Los Angeles Times piece, the artist talks about her time at CalArts and attending school with her mother Guadalupe Pilar Rodriguez (Art BFA 98), who was also enrolled in the Art School.

Her family’s artistic traditions have other curious chapters too — like the time she went to art school with her mom, Guadalupe Rodriguez, who is also a painter.

It was 1993 and Rodriguez had enrolled as an undergraduate at California Institute of the Arts. Intrigued by what she was learning, she suggested her mom apply to the program.

“I went my first year and I said, ‘It’s a feminist art program, Mom — you’d love it!’” she recalls. “So picture 19-year-old Sandy with crazy hair and crazy outfits, [performance artist] Coco Fusco up front, and my mom in the back, playing with my hair.”

Her classmates at the time included now prominent painters such as Mark Bradford and Henry Taylor. “And my mom would be making birria by the loading dock and having tequila parties,” says Rodriguez, containing more laughs. “We are three generations of painters.”

On Jan. 26, 2019, at 2:30 pm, the Riverside Art Museum presents artists talks with Rodriguez and Kathryn Clark, whose exhibition Refugee Stories is also on view at RAM. Both artists will be doing walkthroughs of their respective shows and be available for a Q&A session afterward.

And though not part of either gallery show, Angelenos have two more weeks to see Rodriguez’s banners as part of the Music Center’s Plaza Art Project in Downtown L.A. Two 27-foot banners of her South Los Angeles watercolors, created for the Some Place Chronicles project, can been seen view on Grand Avenue and Hope Street through Dec. 31.