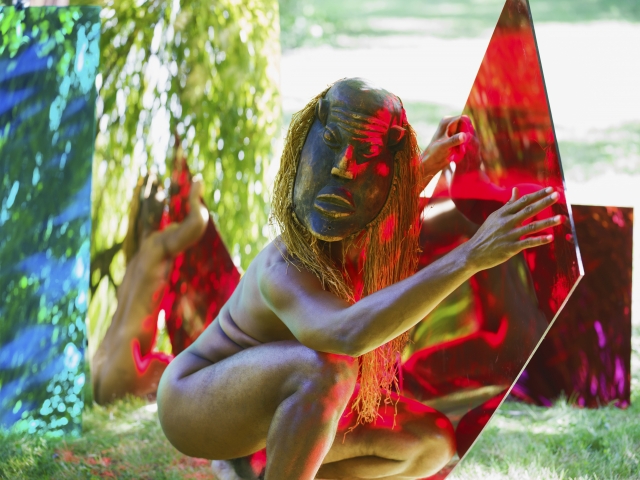 Harris’ series of photographs, in which he poses in a collection of African masks, are described in The New Yorker as “so playful that their pleasures—visual but also sensual, like the feeling of a soft breeze or rough bark on your skin—register before their intelligence settles in.”

A part of Harris’ identity — as an artist who was brought up in the Bronx and Dar es Salaam, Tanzania — the African masks represent the intersection between the personal and the political.

From the Flash of the Spirit exhibition notes:

Alluding to an Afrofuturistic aesthetic, Harris’s new work luxuriates in his cultural roots, embodying a series of enigmatic masked figures engaged in a bold, uninhibited dance of gestures, taking us beyond stereotypical affectations of sci-fi superheroes or sentimental ethnographic conceits.

Harris’s use of masks embraces their mystery with abandon, to evoke elemental powers that invite deeper exploration into our hybrid intersectionality of history, race, gender, sexuality, mythology and memory.

Harris’ work, which includes photographic media, collage, installation and performance, has been exhibited widely, including at The Guggenheim Museum and The Whitney Museum of American Art in New York, and at the international biennials in Sao Paulo (2016), Venice (2007), Seville (2006) and Gwangju (2000).

Flash of the Spirit is on view through January 12 at Salon 94 Bowery.