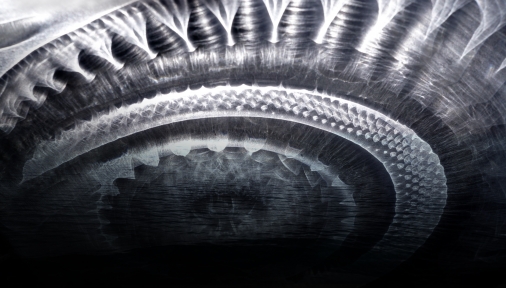 The program includes two new 30-minute works for piano and electronics played by Ray: The world premiere of Ben Phelps’ Sometimes I Feel Like My Time Ain’t Long and Daniel Lentz’s Yellowstone-inspired River of 1,000 Streams. Accompanying the sound are projected visuals by Kim who uses “a variety of materials with a synesthetic sensitivity to sound and image,” according to the program. 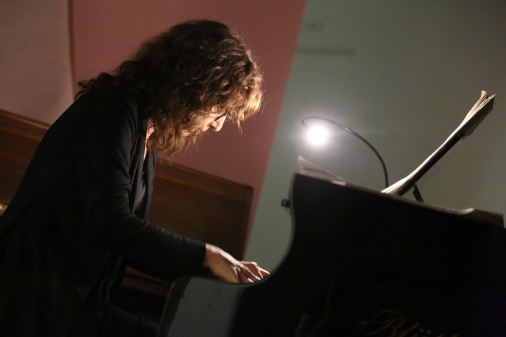 We corresponded with Ray and Kim about their upcoming performance.

24700: How did you end up choosing the Ben Phelps and Daniel Lentz pieces for the performance?
Ray: A few years back composer Ben Phelps proposed a large-scale “piano with electronics” project based on an archival recording of a folk song called Sometimes I Feel Like My Time Ain’t Long. What Ben described to me–time stretching the recording and the subsequent response in the piano–sounded intriguing. The piece was a long time in the making and I finally started working on it last summer. The work is incredibly rich and haunting. As I was learning it, I realized that the Daniel Lentz River of a 1000 Streams, which I had recorded earlier that year for Cold Blue Records, was almost exactly the same length (30-minutes) and also uses electronics. I began to juxtapose the pieces in my head and thought it would make an interesting concert.

24700: In what ways do they relate to one another?
Ray: While the pieces both explore the idea of time they do so in utterly different ways. The Lentz is post-minimal. It starts at the very bottom of the piano and gradually floats up the keyboard over the course of 30 minutes. I play tremolos the entire time (which is very taxing!) which ebb and flow with the electronics creating beautiful waves of immersive sound. The Phelps is more dynamically varied and the audience begins to understand the time stretching process as the piece unfolds.

24700: When you’re playing/practicing these pieces, how does the music influence your thoughts on time?
Ray: When I play these works I tend to experience time on several different planes simultaneously. On one level I am very grounded in the moment because in order to coordinate with the electronics, which is a fixed backing track, I have to listen to a click track. So while you may be hearing something that is very ethereal and free, I am hearing a metronome! On the other hand, this forces me to be so present with the music that the pieces never seem to last longer than about 10 minutes. I lose all sense of how “outside” time is moving relative to the music. And while all that is going on I’m also thinking about projecting long ideas and phrases within that environment. I think we’ve all had many moments in our lives when we realize how utterly relative time is. Playing these works (and hopefully listening to them!) brings that feeling to the fore in what I hope is a fascinating and beautiful way.

24700: When did you and Vicki begin collaborating?
Kim: This is our first collaboration.

24700: What was your artistic process for this performance?
Kim: The piece starts for me with listening, listening, listening. I can’t tell you how many times I’ve listened to these two pieces (and continue to as I work). I first visualize what kind of projection screen architecture or environment I wish to create. For these two compositions, I knew I wanted wide and low horizontal planes to envelop the piano and a tall vertical to speak to Ben’s stretching of time and Daniel’s cascading tremolos. Then since the summer, I’ve allowed myself to experiment and create a ton of new imagery and footage, following my every whim of inspiration.

24700: How did you translate the music into to visual elements?
Kim: I’ve long had a passion for the dialogue that can ensue between sound and image. I think of it less as a translation and more as a resonating interaction. What makes for a more interesting conversation? For Rivers of Time, I’ve been enjoying thinking of what a “river of time” could be, which freed me up from thinking of “river” as water per se. Layers of relativity over any sense of linearity. Much of the imagery comes from the observation of light through different materials and the act of drawing as a meandering thought process and definition of form. Textures morph where the micro can become a cathedral, solidity dissolves and scatters as you surrender to the barely moving.

Listen to Daniel Lentz’s River of 1,000 Streams played by Vicki Ray below: