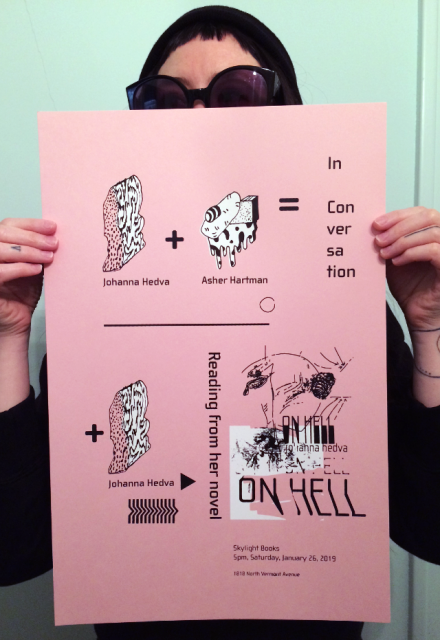 Johanna Hedva will be in conversation with Asher Hartman at Skylight Books. | Poster by Mark Allen, courtesy of the artist

Hedva began the 106-page novel while a grad student at CalArts. It focuses on ex-convict Rafael Luis Estrada Requena, who was jailed for hacking and is not allowed to use a computer post-incarceration. He channels his energy into hacking his body to escape — totalitarianism, capitalism, even Earth. The novel focuses on resistance and fighting against oppression and authority.

In a conversation between the author and writer-artist Dan Bustillo (Art MFA 14) published in Entropy Magazine, Hedva describes in more detail how the book features time as an instrument of oppression:

On Hell is my attempt at a 21st-century version of Icarus, from a crip perspective. I tried to take on Icarus’ themes of ambition, courage, failure, and gravity through the lens of “crip time.” Crip time is a concept within crip theory, very saliently explicated by Taraneh Fazeli, that relates to Freeman’s chromonormativity, and is time both queered and disabled, so yes, you’re definitely aligned.

Fazeli writes: “Dragging on, circling back, with no regard for the stricture of the work week or compulsory able-bodiness, sick time is an amalgam of queer and crip times. Sick time is non-compliant. It refuses a fantasy of normalcy… and hints at how we might begin to tell capitalism to back the fuck off and keep its hands to itself.”

I wrote On Hell before I started my project on disability and ableism within capitalism, This Earth, Our Hospital, but I see the two in close dialogue, even though one is fiction and the other isn’t. Both of them are trying to deal with crip time, or time that isn’t productive, successful, or counted as valuable in a commercial market sense. When time is not regulated by capitalism, and more than that, is actively fucking up such “regularity,” we have to ask different questions about meaning and value.

If one is ill, or incarcerated, or not heternormatively reproducing, how do we understand that life, in terms of the time it has here, and how that time is passed? It’s always been curious to me that we say that we “spend” time, like we “spend” money. But we don’t say we “kill” money in the way that we say we have “time to kill.”

Hedva is a genderqueer writer, artist, musician and performer whose work has been shown at the former Los Angeles-based art space Machine Project, Human Resources LA, High Desert Test Sites, the Getty’s 2013 Pacific Standard Time, the LA Architecture and Design Museum, and the Museum of Contemporary Art on the Moon. Their essay Sick Woman Theory has been translated into Spanish, Italian and is forthcoming in French and Dutch.