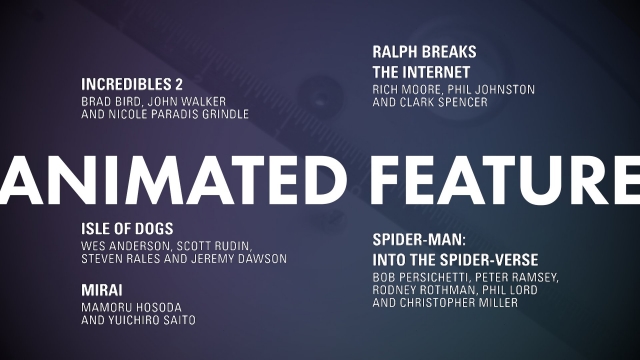 And the nominees for Animated Feature are… | Image: The Academy via Twitter

Early this morning in Beverly Hills, Calif., comedian, actor and writer Kumail Nanjiani and actress, producer and director Tracee Ellis Ross announced the nominees for the 91st Oscars. In the Animated Feature category, three of the five nominated films were directed and produced by CalArts alums:

The other two feature films nominated were Isle of Dogs by Wes Anderson and Mirai by Mamoru Hosoda and Yuichiro Saito.

In a moment of déjà vu, the category mirrors the 2019 Golden Globes nominees, with Spider-Verse ultimately picking up the statuette.

In the Short Animated Film category, former Character Animation faculty member Andrew Chesworth was nominated for “One Small Step,” a film he directed with Bobby Pontillas.

Tune into the Academy Awards telecast on Sunday, Feb. 24, live on ABC at 8 pm ET/5 pm PT to see which film/filmmaker(s) picks up the Oscar.