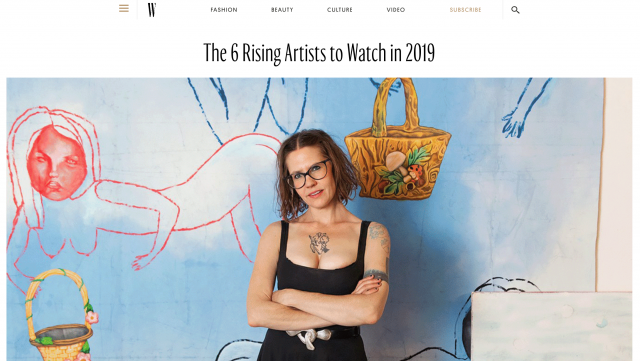 Trulee Hall, above, and Naotaka Hiro, both CalArtians, are featured in W magazine’s ‘The 6 Rising Artists to Watch in 2019.’ | Image: Screenshot

Hall works in video, painting, sculpture, sound, dance and immersive installation. The Other and Otherwise, Hall’s first solo exhibition with Maccarone gallery in Los Angeles, is currently on view through March 2.

In an effort to be both enticing and disorienting, Hall’s exhibition is a “madcap installation of papier-mâché walls, ­bubbling boob ­fountains, and spindly resin tentacles.” According to W, the exhibition gives “physical form to Hall’s meditations on both the violence against women and female empowerment.”

Additionally, Hall is exhibiting a site-specific installation at the New York Street backlot of Paramount Pictures Studios for the inaugural edition of Frieze Los Angeles, which takes place Feb. 15-17.

@truleehall The Other and Otherwise is open this week Tuesday through Saturday from 11 to 6!

Originally from Japan, Hiro now works in Pasadena, Calif. The artist’s portfolio encompasses painting, drawing, sculpture and video, exploring the hidden parts of the body. One of his recent sculptures, A Pair, was featured in the Hammer Museum’s Made in L.A. 2018 biennial. Undergoing a time-intensive and physically challenging process, the artist created two partial life-casts of himself in silicone that were later cast in bronze.

“Together, the two casts of A Pair do not combine to make a whole; instead, the final work is partial and fragmented. Hiro’s intention is not to accurately replicate his body but rather to ‘create a work of reinterpretation or reconstruction of my own image,’” according to the Made in L.A. program.

Tethering himself to a canvas, he’ll spend hours crawling around, drawing concentric circles with oil-paint sticks on its surface. Or he’ll drip stripes of silicone along the front and back of his body until it dries, in order to create partial casts that are later rendered in bronze. ­Having worked as a longtime cameraman for the artist Paul McCarthy, Hiro approaches his work cinematically, even storyboarding the process before he starts, and sometimes recording the performances as he goes along. Endurance is another element in his process. ‘The amount of time I pose for a sculpture depends on my physical ability. After two hours, it really starts to hurt.’