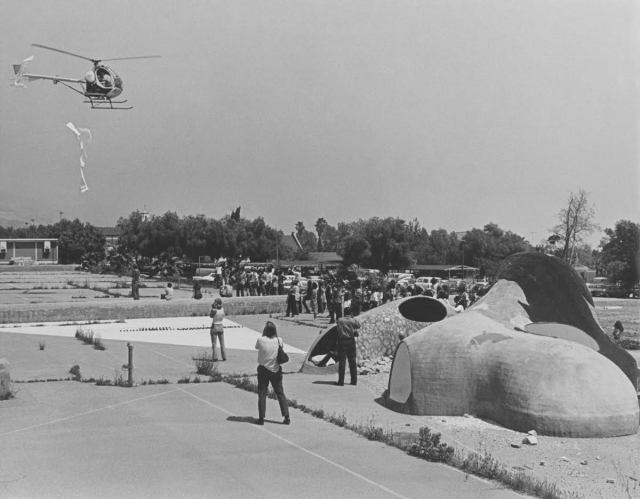 A helicopter drops computer poems by Alison Knowles, in a collaborative event with student Norman Kaplan, over Knowles’ ‘The House of Dust’ in Burbank in 1971. | Image: California Institute of the Arts Archive

Beginning Saturday (Feb. 9), Shelter or Playground will be on view at The MAK Center, a contemporary, experimental and multidisciplinary space headquartered in architect Rudolph M. Schindler’s house and studio in West Hollywood., Calif.

Curated by Maud Jacquin, Anna Milone and Sebastien Pluot, Shelter or Playground is a group exhibition springing from Alison Knowles’ seminal late 1960s work, The House of Dust. It is the result of a collective research effort that began in 2017 known as Reframing the House of Dust lead by Art by Translation, The MAK Center for Art and Architecture, France Los Angeles Exchange and CalArts.

Knowles was a founding CalArts faculty member and began The House of Dust in 1967 as a computer-generated poem. It was composed of quatrains that opened with “A House of…” followed by random sequences of materials, sites, light sources or inhabitants. In 1969 Knowles translated one of the quatrains into an architectural structure that was first installed in New York before it moved to California and CalArts from 1970-72. During its time at CalArts, artists and students created a number of works in response to the structure and used it as a platform to generate and shelter experimental activities.

Although the original House of Dust structure was lost in the 1980s, Shelter or Playground will feature site-specific works that respond to architecture by both Knowles and Schindler and translate it into multiple performative forms.

The title of the exhibition comes from a Schindler text in which he described his house as a “playground” that “grows with its inhabitants” and where “life will regain its fluidity.”

Dimitri Chamblas, dean of The Sharon Disney Lund School of Dance at CalArts, has conceived an interactive performance space that will play a key role in the exhibition. Known as “The Nomad Floor,” the space, which was moved earlier this month from Valencia to West Hollywood, will be home to a series of historical performances on Feb. 16 and 17.

The full performance programming schedule can be found online and includes:

As in last year’s 50th anniversary celebrations of The House of Dust and House of Glass at CalArts and REDCAT, the expansive nature of the MAK Center exhibition illustrates how The House of Dust continues to serve as an entry point into the investigation of architecture, technology and performance.

Shelter or Playground hopes to reactivate the generative potential of Knowles’s work and catalyze interrogations of wider aesthetic and social issues across disciplines. The exhibition is on view until the first week of June and ticketing information can be found on the MAK Center’s Visit Page.

The House of Dust at the Schindler House
835 N. Kings Road, West Hollywood

Admission to the exhibition and performances is free; MAK Center admission: $7 – $10