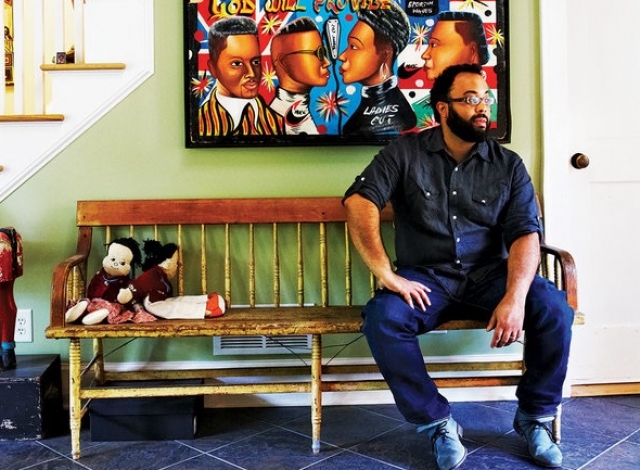 As part of his residency, Young held morning workshops with MFA Creative Writing students on Feb. 7 and 8. During these two-hour sessions, students had the opportunity to discuss various poems with Young as well as introduce themselves and talk briefly about their work.

Young also held two readings – one on campus Thursday night and the other at the Roy and Edna Disney/ CalArts Theater (REDCAT) in Downtown Los Angeles on Friday. At both events, he read a mix of older and newer poems, including several from To Repel Ghosts, his collection of ekphrastic works inspired by the paintings of Jean-Michel Basquiat. He also read excerpts from his non-fiction book Bunk: The Rise of Hoaxes, Humbug, Plagiarists, Phonies, Post-Facts, and Fake News, which has won numerous awards and honors including the Anisfield-Wolf Book Award in Nonfiction, a New York Times Book Review “Editors’ Choice” selection and a “Best Book of 2017″ by NPR, the Los Angeles Times, Vogue, The Atlantic, Nylon and many others.

Young currently serves as the director of the Schomburg Center for Research in Black Culture and is the Poetry Editor of The New Yorker. He is the author of 13 books of poetry and prose, most recently Brown, a New York Times Notable Book and Blue Laws: Selected & Uncollected Poems 1995-2015, longlisted for the National Book Award. His collection Jelly Roll: a blues was a finalist for both the National Book Award and the Los Angeles Times Book Prize.

The Katie Jacobson Writer-in-Residence program was established in 2013 as a way to bring world-renowned writers to CalArts in order to work with MFA students and deliver a public lecture. It is named after late MFA Creative Writing alumna Katie Jacobson and generously set up by her parents. Past writers-in-residence have included Roxane Gay, George Saunders, Samuel Delany and Lydia Davis.