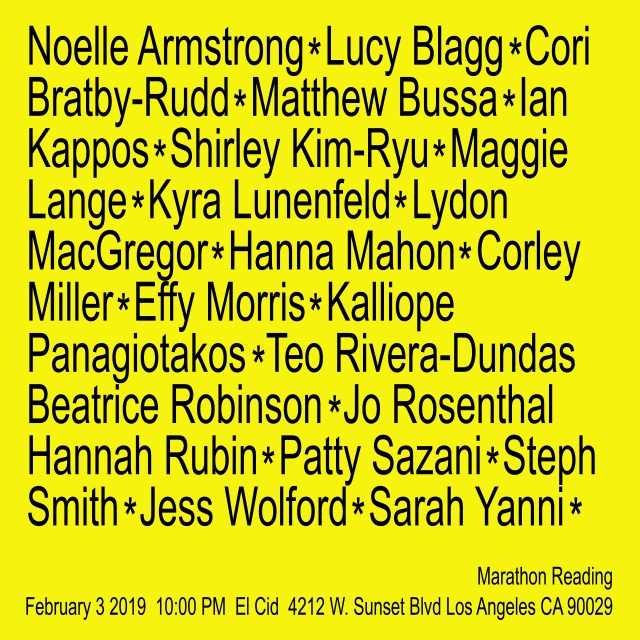 CalArtians gather at El Cid for an evening of reading poetry and prose. | Photo: Steph Smith

In the after-hours of Super Bowl Sunday, Feb. 3, a group of CalArts students gathered at El Cid in the Silver Lake neighborhood of L.A. for several hours of poetry and prose readings. Organized by Steph Smith (Critical Studies MFA 20) with the help of Jess Wolford (Critical Studies MFA 19), the event began at 10 pm and continued into the early hours of the morning, drawing a full house of attendees to the popular venue.

Of the roughly 20 readers, most were from the MFA Creative Writing program, but the evening also featured students from other CalArts métiers. Each reader was given a five-minute time slot and the program was divided into two parts, with a brief intermission in between.

When asked about organizing the event, Smith commented: “I think collective reading experiences are so important to discovering and fostering a sense of community between creative peers – especially when they are often invited to function within very specific and more often than not self-motivated modes of relationality with one another.”

In an effort to creative an archive of the public performance, every table was adorned with a disposable camera, and attendants were encouraged to participate and take photos. Smith also gave readers an option to bring physical copies of their work to turn in, and she hopes to combine the writing and photographs into a zine for the Los Angeles Art Book Fair, coming in April.