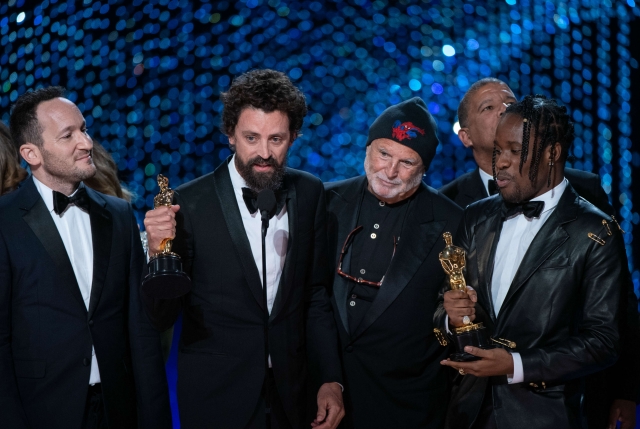 CalArts alum Bob Persichetti is on the Oscars stage flanked by members of the ‘Spider-Man Into the Spider-Verse’ team, after the film won the Oscar for Animated Feature at Sunday’s ceremony. | Photo: Aaron Poole / ©A.M.P.A.S.

Spider-Man: Into the Spider-Verse won the Oscar for Animated Feature at last night’s Academy Awards ceremony in Hollywood. Directed by CalArts Character Animation alum Bob Persichetti (Film/Video BFA 96) as well as Peter Ramsey and Rodney Rothman, the film was produced by Phil Lord and Chris Miller, the duo also responsible for The Lego Movie and Cloudy with a Chance of Meatballs, among other titles.

When the Spider-Verse team gathered onstage to collect their Oscars and deliver their acceptance speeches, the orchestra was cued and the mic was cut-off during Persichetti’s turn, but he was able to deliver his message backstage in the pressroom: “Literally, we were just going to thank Stan Lee and Steve Ditko [Spider-Man’s creators] for really inspiring this whole thing,…and for being a force of believing that all of us human beings have the potential and the capacity to be heroes,” he said.

And the #Oscars winner is… pic.twitter.com/HQyRoqy6d5

The film by Sony Animation has proven to be a critical darling, crowd pleaser — and game-changer. From Deadline:

Spider-Man: Into the Spider-Verse has been hailed widely as a bold, fresh and evocative new approach to animation filmmaking thanks to its retro, hand-drawn spirit and Lord and Miller’s eagerness to reinvent the standard industry animation approach, which had, in their view, created a flat and homogenized predictability to Hollywood releases in recent years.

Adding to the spirit of revolution, Spider-Verse is only the second theatrical animated film ever based on characters from Marvel Comics (the first was Big Hero 6 in 2014, which featured relatively obscure characters from Marvel’s mythology) and it veered from every previous big-screen Spider-Man adaptation by featuring a new version of the hero — a bilingual, mixed-race teen named Miles Morales (given voice by Shameik Moore). 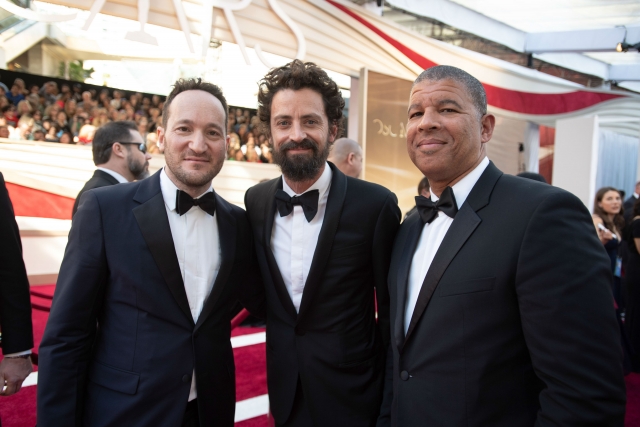 When asked by a member of the press what they love about being storytellers, Persichetti answered first: “To be a storyteller, it’s really just about connecting with your audience, whether it’s your little kid that you are putting to sleep or, apparently, millions of people who go see your movie. So I think it’s just validation of just being a human and sharing the experience of being a human…so it’s kind of an amazing career.”

Added Miller: “To feel like you have affected someone else’s life positively, one way or another, is a really magical thing that we don’t take lightly.”

While they might not have brought home the Oscar statuette this year, we’re willing to bet that Bird and Moore still had fun at Hollywood’s biggest night. (See Bird’s picture for proof.)

Fellow SIMPSONS alum and current fellow nominee Rich Moore ( Ralph Breaks The Internet) at the Host-less* Oscars.
*(We are both ready to “emergency host” should things get outta hand) pic.twitter.com/iXA6gyUUOq