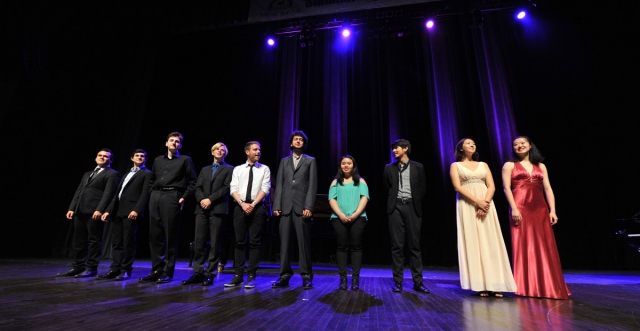 Earlier this month, Yamaha announced the winners of its 2019 Yamaha Young Performing Artists (YYPA) Competition. One of those 11 outstanding musicians is Will Kjeer (Music BFA 19) – a jazz pianist, composer and current student in The Herb Alpert School of Music at CalArts.

Kjeer, originally from Minnesota, is already a recognized performer and composer. Jazz Police notes that he has an “enviable resume [even] for artists’ twice his age.” He attended the St. Paul Conservatory for Performing Artists and the Interlochen Arts Academy in Michigan before making his way to CalArts.  He has performed as a bandleader and sideman around the US and in Canada, including the Twin Cities and Iowa jazz festivals, the John F. Kennedy Center in Washington DC, the Lighthouse Cafe in Los Angeles and the Upstairs Jazz Club in Montreal, Quebec.

Kjeer and his fellow winners will receive an all-expense paid trip to the YYPA Celebration Weekend in June, which takes place during the Music for All Summer Symposium. They will perform in front of an audience of thousands, which will be recorded and photographed. Winners will also participate in workshops designed to help launch professional music careers. The Celebration Weekend will conclude with a concert by winners alongside 2019 Featured Guest Anders Astrand, a Yamaha Performing Artist and renowned international jazz guitarist. Previous featured guest artists have included Jauvan Gilliam, principal timpanist of the National Symphony Orchestra, and Jeff Coffin, three-time Grammy Award Winner and saxophonist for the Dave Matthews Band.

Each year, the YYPA recognizes exceptional young musicians studying in the US, with a focus on jazz, classical and contemporary genres. To be considered, applicants submit audio and video auditions which are then evaluated by a panel of Yamaha Performing Artists and national celebrity musicians.

This year’s winners join a community of more than 300 musicians who have been recognized during the program’s 31-year history. They “contribute to the legacy that the YYPA program has upheld and we are proud to shine a spotlight on these young men and women for the musical excellence they have accomplished so early in their careers,” comments John Wittmann, Director of Artist Relations and Education for Yamaha Artist Services Indianapolis. Previous noteworthy winners include:

With professional support from Yamaha, Kjeer and his fellow winners will walk away with plentiful knowledge and opportunities for portfolio building. Winning the YYPA competition establishes the group of exceptional young musicians as talent to watch.