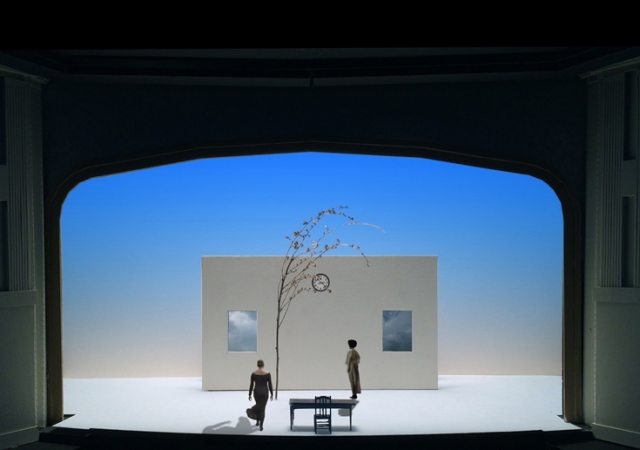 On Friday, March 8, Carrie Mae Weems (Art BFA 81) takes the stage at The Theatre at Ace Hotel to present Past Tense, a performance-based work combining music, text, projection and video. Weems is an acclaimed artist whose who has been a part of contemporary art discourse for more than 30 years. The New York Times calls her work “as subtle and sublimely elegant as it is uncompromisingly political.”

Past Tense, presented by CAP UCLA, features singers Eisa Davis, Alicia Hall Moran, Imani Uzuri and Francesca Harper; poet and former CalArts faculty Carl Hancock Rux; and music director Craig Harris. The performance aims to be a deep dive into the enduring significance of Antigone — the titular character in Sophocles’ tragedy — and her profound relevance to our contemporary moment.

Past Tense’s origins lie in Weems’ work Grace Notes, which explores the notion of grace in the face of violence. Grace Notes was inspired by President Barack Obama singing “Amazing Grace” in the wake of the 2015 mass shooting that killed nine African-American members of a church in Charleston, SC. “While working on Grace Notes for months it occurred to me that I was telling the story of Antigone, wherein an innocent man dies by unjustified means and his sister fights for the right to bury him honorably,” explains Weems, “but the wider community refuses her; her right to justice, and to peace, is denied.”

The aesthetic of Past Tense is modernist and simple. A clean spare stage presents singers on a raised platform, representative of a Greek chorus, with Weems at a clear lectern. Behind this, startling imagery is projected on a screen, conveying the risk of an encounter between authority figures and citizens who are fervent in their sense of morality. This powerful piece explores themes of social justice, escalating violence, gender relations, politics and personal identity within the context of contemporary history — recurrent subjects in Weems’ practice.

In 2013, Weems was awarded a MacArthur Genius grant and the year after, she became the first African-American woman to exhibit a retrospective in the Guggenheim Museum. Most recently, The New York Times Style Magazine celebrated Weems as part of its 2018 Greats issue, alongside Solange, George R.R. Martin, Alessandro Michele, Bruce Nauman and Viggo Mortensen. She is described as a “radically innovative artist” who has “steered the cultural discourse” by poignantly bridging the gap between art and politics.

Tickets for Past Tense start at $26 and can be purchased through CAP UCLA’s website.