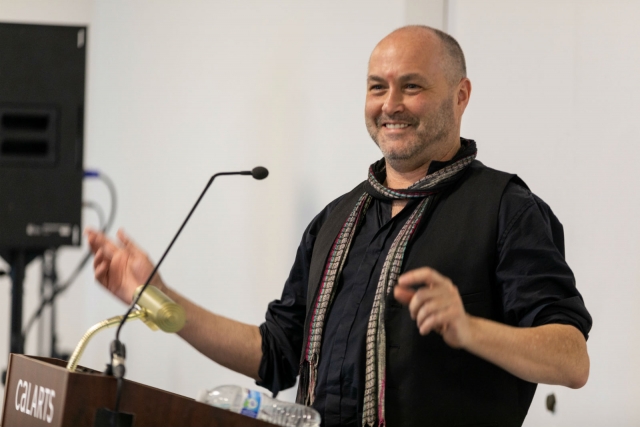 Acclaimed writer Colum McCann delivered a lecture at CalArts on Feb. 28 as the 2019 honoree for the Tim Disney Prize for Excellence in the Storytelling Arts.

McCann is the award-winning author of six novels, including Let the Great World Spin (2009) and TransAtlantic (2013), and three collections of short stories. His latest collection, Thirteen Ways of Looking, earned a Pushcart Prize and selection in the Best American Short Stories of 2015.

During the lecture, McCann spoke not only about the need for storytelling, but also the value of active listening; that while speaking our own truths are important, so is hearing different perspectives and what others have to say. McCann, who was born and raised in Dublin, Ireland, touched upon the work of Sen. George Mitchell and his role in the Northern Irish peace process during the 1990s, and how Mitchell approached peacemaking — by letting both sides tell their stories, forcing them to listen each other.

The prize is awarded annually to a student and an accomplished arts professional. In addition to McCann, who spent the day at CalArts working with and speaking to students, two student awardees, Shan Wu (2018) and Silvi Naçi (2019), were also acknowledged and honored at the event and reception.

Named for CalArts’ Chairman of the Board of Trustees, the Tim Disney Prize for Excellence in the Storytelling Arts celebrates “original and courageous storytelling that illuminates the human condition and uplifts the human spirit.”

The endowed support for the prize comes from William Haney and Maura McCarthy to honor Disney’s commitment to making the world a better place through the unique powers of gifted storytelling.