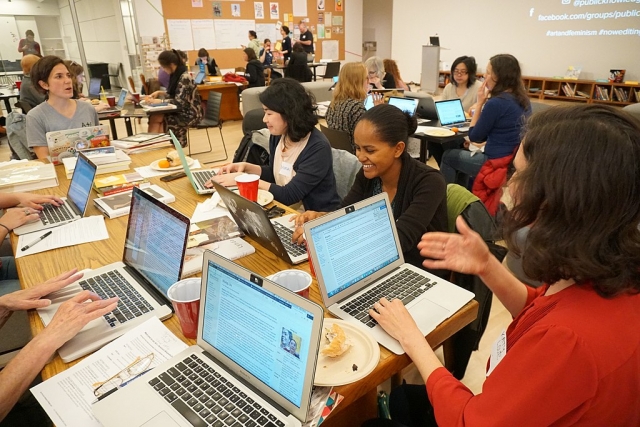 Throughout the month of March, East of Borneo, the online magazine of contemporary art in Los Angeles published by the CalArts School of Art, has partnered with Art+Feminism to present the Worldwide Wikipedia Write-In.

This global do-it-yourself campaign aims to combat gender bias and improve the coverage of women, intersectional feminism and the arts on Wikipedia. Despite the fact that Wikipedia is the world’s fifth most popular website, East of Borneo notes, “only 13% of Wikipedia editors are women; and of the 1.5 million biographies it hosts in English, only 17% of those articles are about women.”

The write-in events take place at major museums and art institutions across Los Angeles, and there are two happening this week:

These and all other Los Angeles events are led by Art+Feminism ambassador Stacey Allan, who facilities step-by-step Wikipedia instruction.

East of Borneo is a collaborative reexamination of West Coast art and its history. They publish essays and interviews alongside a multimedia community archive, which extends into print as East of Borneo Books. The mission of the organization is to call attention to the best writing on visual culture of Los Angeles.

Art+Feminism is a global DIY campaign to improve the coverage of cis/transgender women, feminism and the arts on Wikipedia. Since 2014, more than 10,000 people have created and improved over 33,000 Wikipedia articles at more than 800 Art+Feminism events around the globe.

All of the Worldwide Wikipedia Write-In events are free of charge and open to people of all skill levels, gender expressions and identities. Attendees are asked to bring a laptop or tablet computer as well as any reference materials they’d like to work from or share.

For a full schedule or to RSVP for an event, go to eastofborneo.org/artandfeminism.

Details and tickets available on East of Borneo’s website.