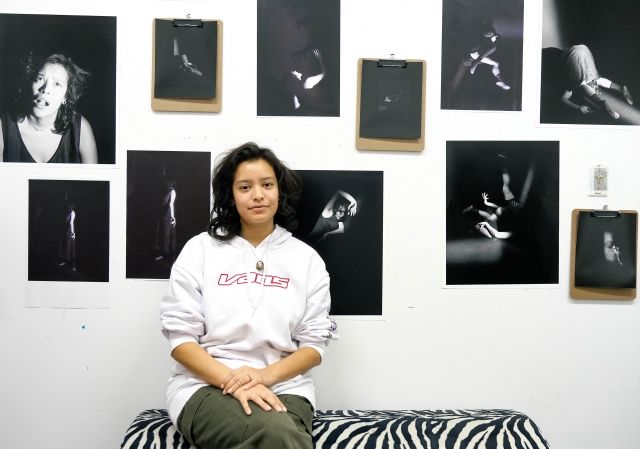 Each week of the academic year, a different student from the CalArts Program in Photography and Media takes over the program’s Instagram account to share their images and projects.

At the beginning of the semester on Jan. 13, the baton was passed to Mia Gamboa (Art BFA 20), who posted images from their self-portraiture series ‘Devention of Hysteria.’

We got a chance to stop by the artist’s studio to learn more about their work.

24700 blog: Tell us more about the series ‘Devention of Hysteria.’
Gamboa: This project started in Ellen Birrell’s class, Fuzzy Pictures, which was about the instability of information in photographs. I worked with MFA student Alia Ali to make photographs for our class group show. I didn’t know what I wanted to do, but I decided to start doing movements for the self portraits. Also, around this time, I started seeing a therapist because I had been diagnosed with PTSD, so one of the things I was drawing inspiration from is my experience with L.A. health care services.

After the first set of images were developed, I met with a faculty member in the photo lab, Darrell Walters, who told me about the book Invention of Hysteria by Georges Didi-Huberman. It’s about Charcot, a famous French teacher and clinician in the late 1800’s, who was photographing mentally ill women living in the Salpetriere hospital in Paris. His goal was to create a physiognomy of hysteria. Essentially, he was manipulating and hypnotizing the women into poses and having them perform erotic movements for the camera. Years later, all of his work was refuted but he got away with it for a period of time. And Didi-Huberman’s argument is that this work should be included in art history and the history of photography, especially since they’re very theatrical and performative. It’s pretty incredible.

I’ve gone back into the studio to take more self portraits. I’m copying some of the women’s movements as well as coming up with my own in order to try and sew together this history of hysteria with my own history and experience using the L.A. health department services. I decided to call this series Devention of Hysteria–devention is not a real word–but I’m saying it in terms of deconstruction. Essentially doing what other scientists have done but from an artist’s perspective.

In 2017 I was diagnosed with Post Traumatic Stress Disorder (PTSD). PTSD has been commonly associated with soldiers who have come back from war. Although, PTSD can affect anyone who has experienced a traumatic event in their life that hasn’t been fully processed, and can be triggered day to day to a point where maintaining daily function can become difficult. . . . Since then, I have been seeing a psychiatrist and therapist to help me work through my trauma. This initially sparked my interest in the history of women’s mental healthcare through the lens of the history of photography. I began taking several self portraits and had then been directed to research “Invention of Hysteria” by Georges Didi Huberman, whom had considered the Salpêtrière mental hospital where Jean Martin Charcot (ca. 1825-1893) proceeded to take images of women he believed to be experiencing Hysteria. Huberman argues that this is an important piece of the puzzle in womxn’s health, as well as the history of art and photography. . . . The title of my series in response is Devention of Hysteria. Here is Mélancolie Cataleptique. @calarts @calarts.art @calartsvals @itsmiagamboa #calarts #artist #womxn #hysteria #france #history #lgbtq #photography #photographer #ilford #4×5 #bw #bwfilm #salpetrierehospital #mentalhealth #healthcare #womensstudies #arthistory #response #losangeles #california #lighting #miagamboa #art

24700 blog: Tell me more about the historical context of hysteria?
Gamboa: The root of the word basically means an illness coming from the uterus. Many cultures once believed that the uterus is not fixed in a woman’s body. People thought that the ability for the uterus to migrate made women “crazy.”

The history of hysteria is wild. A friend of mine also happened to be doing research on hysteria but further back in history to the 1500’s and learned that the Catholic church used to perform exorcisms on women’s uteruses. They would be propped up in stirrups while someone screamed into their vaginas trying to get the demons out.

It’s interesting that hysteria is still a commonly used word. It’s made me more aware of other words that we should probably stop using. Especially in photography the language is horrible. For example, with our lighting equipment one of the terminologies is ‘master and slaves.’ The women in my program started to say ‘mother and babies’ instead. It feels so wrong otherwise.

24700 blog: Do you feel like you have a connection with the women Charcot was photographing?
Gamboa: Yes, I think about the women all the time, and in some way it does feel like we’re communicating. I recently posted a diptych of one of Charcot’s images of a woman with her eye winking, which was labeled a “hysterical wink,” and also a photo in which I’m replicating the gesture. And the more I began creating references back and forth between photos it was, as one of my faculty members said, a kind of choreography. So although it’s been painful, it’s also cathartic. Through this process of solidifying my experience into an object, I’ve become more in control of my mental health, and it’s helped with healing.

24700 blog: Were there any artists who you drew inspiration from?
Gamboa: I’ve been looking at a lot of self-portraiture done by women, such as Frida Kahlo. I was interested in the way she painted her body. A lot of people don’t know that she suffered a very traumatic incident. She was in a bus accident and a pole went through her vagina. It was really brutal and she was bedridden for most of her life. It’s why she painted her body.

The faculty here has also been really influential. If I’m having an issue I can talk it through with them. I’ve noticed that my relationship or what I’m looking for in my meetings with faculty has evolved. I’m at a point in my practice where I’m making work more frequently and inviting faculty to discuss and critique my work, as opposed to when I first started at CalArts and I was unsure of whether or not I should make something or how I should start. I’ve gained a lot of confidence going through this process.

24700 blog: Is this series different from work you’ve done in the past?
Gamboa: A little bit actually, because I’ve never done self portraiture before. Also it was a new experience to have someone else operate the camera. But looking back at what I’ve done the past two years here, I can see that there is a common thread and I have been doing something specific. My work is very much about my identity. So me being a woman, being queer and having mental health issues are pretty big things that inform my identity.

Well, it’s Sunday! Last day of my takeover here @calartspm . . But thought I would dedicate this last post to my special friend and soul sister @studio.alia.ali / We have truly been learning and growing together through our practices becoming ever involved in each others processes. One of the most important things about attending an educational institution is the bonds you create, that not only bring us closer together, but helps us expand. I’m so grateful to this wonderful woman and all of my fellow colleagues here @calarts / Love and blessings to all. . . @itsmiagamboa @calarts.art @calartsvals #losangeles #photography #artistsoninstagram #artists #aliaali #miagamboa #calarts #love #bonds #art #students #bedtime #goodnight

24700 blog: What’s the collaborative process with Alia been like?
Gamboa: I met Alia in her first semester at CalArts. Since then we’ve been working consistently on each other’s projects. We’ve built a really beautiful relationship. We just started talking and hanging out and we had studio visits with each other. She actually does a lot of self portraiture already. I helped her with a shoot first.

When she was photographing me for this series, she had never worked with a 4×5 large format camera, and surprisingly, she picked it up really quickly and was so incredible because it’s a really difficult process to learn. There are numerous steps and you have to be super precise. Just to set up the 4×5 camera for one photograph can take ten minutes. Plus, we were doing long exposure. Some of the positions I was in left my body in so much pain. There were a few times where we were going to shoot multiple days in a row and I couldn’t do it because I was already so sore.

24700: Do you have plans for an exhibition?
Gamboa: I’m currently working on developing this project as my thesis. I’m thinking about combining ‘Devention of Hysteria’ with a performance-based work. One thing I want to do is create a ritual that involves coating objects in layers of paint. I’m thinking about layers of trauma and how people heal from PTSD. What I’d like to do is perform this myself and also invite people into my studio to participate in this if they have a traumatic experience they want to work on letting go of. It’s not that I think this is going to heal them completely, but it’s a way to start on a path towards healing. It’s a really important element to my practice to engage with people and create something that inspires social interaction. Especially because that wasn’t my experience with art when I was growing up. Art was made inaccessible to me.