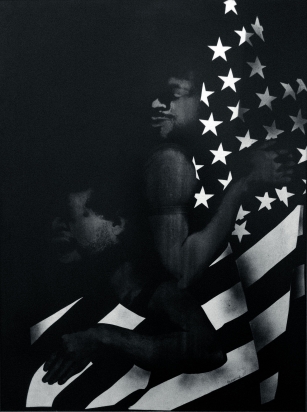 On Saturday, March 23, the internationally acclaimed exhibition, Soul of a Nation: Art in the Age of Black Power 1963-1983 makes its West Coast debut at The Broad in downtown Los Angeles.

Beginning at the height of the civil rights movement and running through the activism of subsequent years, the show features era-defining work from 60 black artists, including Chouinard Art Institute alums Noah Purifoy (56), David Hammons (66-68), Timothy Washington (69) and Daniel LaRue Johnson (early 60s). Through painting, photography, sculpture, collage, assemblage, performance, and more, Soul of a Nation celebrates the work of black artists in this significant time period in American history, “showcasing communities engaged in robust artistic dialogues, while also revealing disagreements about what it meant to be a Black artist at this time.” (The Broad)

In three galleries, the significant role of Los Angeles in the art and history of the era is explored. In one gallery, the 1971 LACMA exhibition, Three Graphic Artists – which featured the work of Hammons, Washington and Charles White and resulted from the activist efforts of the Black Arts Council – takes focus, alongside additional works by Hammons and White. In another gallery, the aftermath of the 1965 Watts Rebellion is explored through the assemblage creations of Purifoy, Johnson and others.

In addition, The Broad will be the only United States exhibition venue to show Purifoy’s Watts Riot and Hammons’ Injustice Case.

Organized by London’s Tate Modern, Soul of a Nation debuted stateside at Crystal Bridges in Bentonville, Arkansas, before traveling to the Brooklyn Museum in New York and making its final U.S. stop at The Broad.