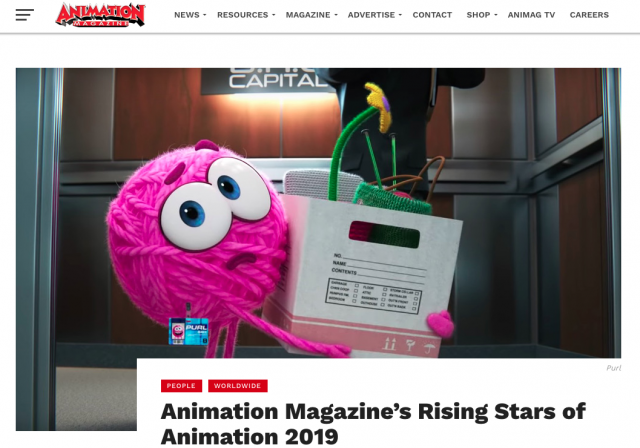 Among the artists included in Animation Magazine’s “Rising Stars of Animation 2019” list were CalArts alum Matt Braly (Film/Video BFA 10) and Cécile Carre, an exchange student from Gobelins Arts School in Paris, who studied at CalArts in 2017.

The magazine publishes its annual list of up-and-comers in the animation industry every spring. The list, which featured 12 profiles in past years, was expanded to this year’s “Special 16” to accommodate the amount of diverse and talented professionals in the field.

Matt Braly is one such professional. An avid doodler as a child, Braly was inspired to pursue a career in the arts when Pixar animator Bobby Podesta visited his Sacramento high school. He quickly enrolled in life drawing classes at his local community college and worked on his CalArts application. Upon graduating from the School of Film/Video, he began an internship at DreamWorks, which led to storyboarding and revisionist credits on Gravity Falls, created by fellow CalArts alum Alex Hirsch (Film/Video BFA 07), as well as Steven Universe.

????WELCOME TO AMPHIBIA! It's official. We are making a show about a teen girl stuck in a crazy frog world. Please bear with me as I gush and shill harder than I've ever shilled/gushed before. pic.twitter.com/JDMWuQXYeC

“It’s important not to compare yourself to others too much,” Braly said in his Animation Magazine profile. “We all grow at incredibly different rates. I remember getting really discouraged in school when I would see how much better everyone’s work was and often felt like I was lagging behind.  If I could do it all over again, I would try to loosen up a bit more and just have fun. You’d be surprised how often that produces the best work!”

Braly is also the creator of the upcoming Disney Channel show Amphibia, which follows Anne, a teenage girl who befriends a helpful frog named Sprig as she navigates a marshland inhabited by frog people.

Fellow rising star Carre loved animated films as a child growing up in the French department of Réunion Island (located in the Indian Ocean). Despite thinking that she could not pursue an artistic career throughout her youth, at age 24 she switched from an engineering job to apply to the prestigious Gobelins l’École de l’image. Upon realizing the amount of opportunities in French animation, she nurtured her youthful passion for drawing and comic books in her studies.

“It may sound cheesy, but work with love,” advised Carre in her Animation Magazine profile. “What I mean is that I think that it is only by loving and enjoying the process of creating/building something that you can make it really good. And if you love the process, it feels almost effortless, not like a job. So of course you should give yourself some challenges, but allow yourself to take pleasure in it.”

Braly and Carre share the honor with CalArtians featured in the publication’s previous listings. Alum Yonatan Tal (Film/Video BFA 17), known for his festival-winning second year short Aquarium, was featured in the magazine’s Rising Stars of Animation in 2018.