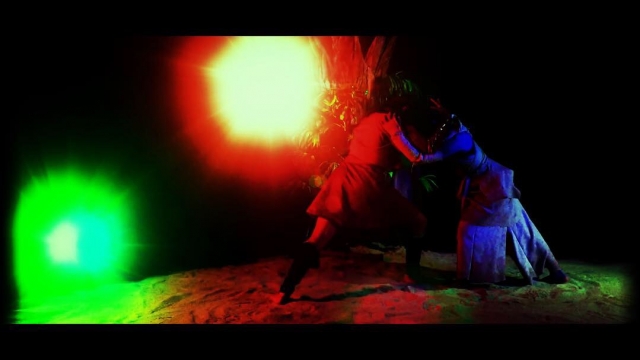 Still from ‘Europa 222,’ a proof of concept film by CalArts student DeJohn Cartier Taylor in collaboration with a full CalArts cast and crew. | Image courtesy of the artist.

The film, which was made in an intensive three-week period with only a $1,500 dollar budget, introduces the main characters and aesthetic for a television series Taylor is developing also titled, Europa 222.

Set on a hyper-polarized planet, the series follows two sorceresses from warring nations, who are brought together by the spirits of their ancestors to discover the truth about their history. The two are tasked to find six hidden Merkabas before they’re taken by an ancient evil force known as the Logos.

More from the series description:

Europa 222 artfully reveals the precious context of a forbidden yet sacred friendship that managed to blossom despite social, cultural and political barriers. A magical blend of elements from both African and Greek mythology: Europa 222 carefully explores classism, colorism, colonialism and sexism within the context of a fictional world by using both elements of familiarity and unfamiliarity.

We interviewed Taylor and Production Designer Ellody Wu (Theater MFA 19) to learn more about the project:

24700: What was your experience like collaborating with your fellow CalArts peers?
Taylor: The experience of collaborating with my fellow CalArts peers was magical to say the least. With the caliber of talent present within the schools of Art, Dance, Music, Theater, and Film/Video, this endeavor brought me to the realization of the fact that when the right group of students come together on the right project, CalArts has the capacity to function as a true “mini-studio.” Working with such profound artists that are only evolving in the expression of their crafts made me feel grateful to be a part of such a vibrant community of creation.

24700: The proof of concept video actually has a very experimental feel. How does that relate to your vision for the series?
Taylor: I would go as far as saying that the entire envelope of narrative film and television production is expanding: sometimes such an expansion calls for “experimentation.” Now, more than ever, creators are using nonconventional methods of filmmaking to further express their ideas and emotions on the screen.

My background in music composition pushed me into a world in which stories are told without the use of words. I think in our modern world, in which everything is about instant gratification, we have lost our appreciation of the subtle. In my opinion, it is the subtle that deserves to be considered the sublime. As a film director, I thought to myself, if music can be used as a tool of narrative communication, then why can’t dance/movement?

Dance is the heart and soul of Europa 222. In the series, there happens to be an entire race of beings that communicate with one another through dance. So while the series Europa 222 exists within the narrative format, it is far from conventional. So I agree, the devices used to authentically express the story and world of Europa 222 are very “experimental.”

24700: What are your influences for the show?
Taylor: Nonfictional human history blended with Greek and African mythology. 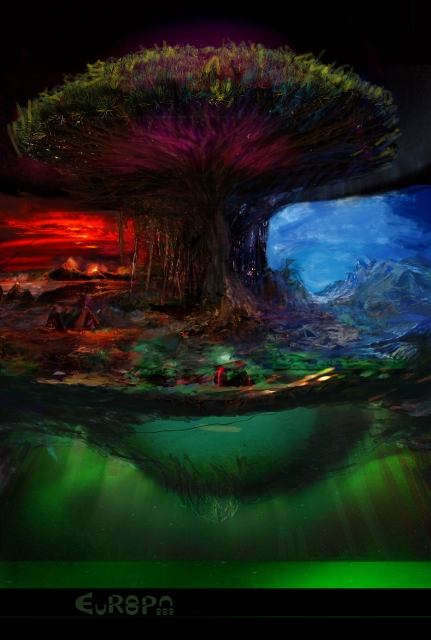 24700: Ellody, what drew you to this project?
Wu: When DeJohn as a director and originator pitched the story of Europa 222 to me, the vastness of the narrative world sparked a huge array of visual possibilities in my head that, to me, would be an exciting mind-jarring challenge to explore. And I want see more about what I am seeing from the entrance into the depth of the planet. It was a very fruitful learning experience, I deeply appreciate the immense amount of trust the director and the whole team have had for me.

24700: What was your production design process like given the short time constraints?
Wu: The process kicked off with a dense timeline. I started the conceptual stage with decent amount of freedom under key guidelines me and DeJohn had came to agree upon to settle the look and feel of the world. Then I began to break down the concepts into essential elements for feasible execution according to the schedule and storyboards.

The set was built in two weeks. The challenges occurred amid all the juggling between the available resources and how to utilize them to achieve the authentic environment that represents the aesthetic of the world. I am very thankful for every one on the design team, the producers and the director for their creative input and incredible talent to be so supportive and flexible in the changing situation despite the limited time and space, budget and hands. For the majority of time in the construction period, I had been focusing on building the set itself as well as the communicating amongst different disciplines and with school. Nothing will be the same without every member creating the best version of what it could be. We learned a lot from interacting with school and external vendors for how to be better at independent production. Thank you so much again to all that’s been supporting us along the way.

Additional CalArtians in the cast and crew:

Check out a behind-the-scenes photo from the shoot below: 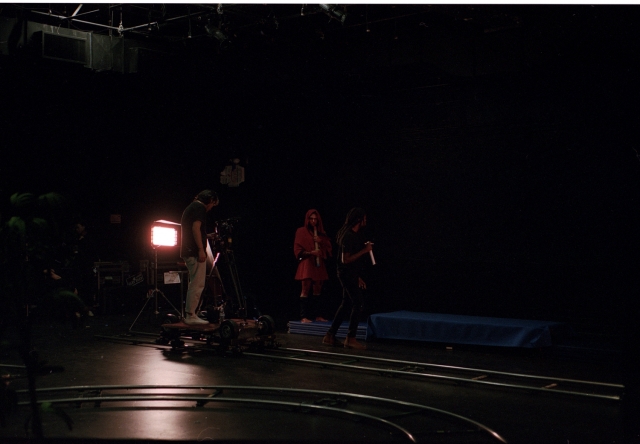 Behind-the-scenes of ‘Europa 222,’ a proof of concept film by CalArts student DeJohn Cartier Taylor. | Image courtesy of the artist.