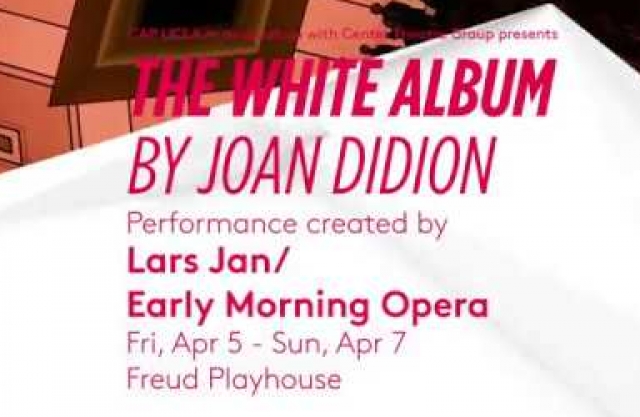 Running through the weekend and staged by Jan’s Early Morning Opera company, the production is only the second of Didion’s works to be adapted for the stage.

Made up of 15 vignettes performed on a set evoking a mid-century home contained by sliding glass doors, the production opens before two separate audiences: the traditional one seated in the theater and a smaller, onstage audience of young artists, activists and students. As the play’s action builds to a climax, forcing the audiences to consider the dual meaning of Didion’s famous opening line (“We tell ourselves stories in order to live”), the second audience’s role morphs from spectatorship to participation.

Underscoring the brutal and unjust similarities between 1968 and the present, The White Album culminates with an open forum conversation between audience and creative team, challenging participants to look critically at the past and charge new paths forward.

“The late 1960s was full of potential energy. That’s the genesis of this production – or no, not genesis, more like reading tea leaves, a retrospective realization – to have a conversation about those issues and what they mean,” Jan recently told the Los Angeles Times.