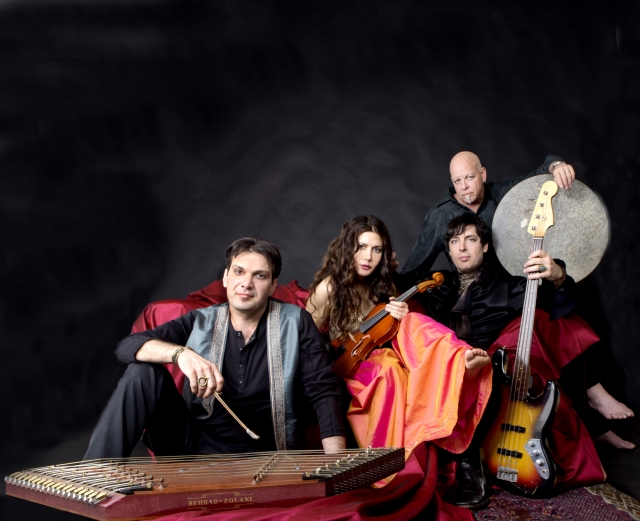 Guest artist Deyhim was already acquainted with most members of Opium Moon — even before the band became “official.” Deyhim and Gordy worked together on CalArtian John Debney’s (Music BFA 78) composition for the thriller series American Odyssey, and she was already acquainted with Saedi and Hadyn. Deyhim frequently sat in on the group’s informal playing sessions at Corazón Performing Arts in Topanga, Calif., which sparked the genesis of Opium Moon.

“It’s great to have her join us again,” said Gordy during a recent phone interview. “She’s just so creative, and once she knows the melodies or the tunes—our stuff is very improvisational—she can kind of just go with it. She’s amazing.”

The band’s members hail from Canada, Iran, Israel and the United States, culminating in a sonic experience inexplicably old and new, earthy and airy, pulsing and hazy all at once. A joyous, timeless sound unconstrained by market forces, it is little wonder that their music debuted on four separate Billboard charts: Classical, Classical Crossover, World Music and Heatseekers.

“This music, or what we’re trying to do with it and what we hope can be accomplished is to build bridges, not walls,” said Gordy, echoing Disraeli’s sentiments during their Grammy acceptance speech.

The group recently performed in London for a television spot on Manoto TV for Nawruz, the Persian New Year.

“Some of our best performances ever are what you see on that network right now,” said Gordy. “And we only shot three tunes, but that’s just the nature of this band. When we actually, finally can escape the rest of the world and the rest of reality, and just do what we do when we’re playing together, it’s really transformative and transforming. It’s magical and there’s not enough words I can use to describe it.”

The percussionist and educator served as assistant to Nicholas England, the then-dean of The Herb Alpert School of Music at CalArts from 1980 to 1982. Gordy also boasts credits on albums with artists like John Legend, Michael Bublé and Guns N’ Roses, and various films including Frozen, Selma and Harry Potter. Gordy has also performed with numerous orchestras, including the Hollywood Bowl Orchestra, the Los Angeles Philharmonic and the National Symphony Orchestra.

The name Opium Moon was inspired by the poem titled “She Responded” by 14th century Persian poet Hafez. The group’s vision was to create music that fosters deep human connection and celebrate each others’ “rich cultural legacies,” noted Disraeli on their website.

Will call and seat assignments for Thursday night’s show at Largo opens at 6 pm. Seating is assigned on a first-come, first-served basis. The show begins at 8 pm.