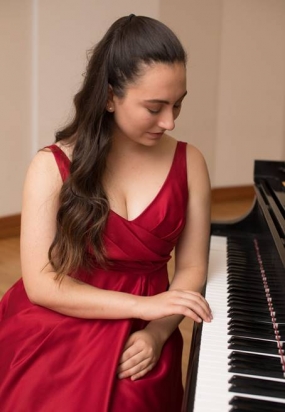 Maya Paredes, a BFA 1 student in The Herb Alpert School of Music at CalArts, is among the guest performers on From the Top, which airs Sunday (April 7) in Los Angeles on KUSC-FM at 6 pm. Paredes performed “Levante” on the episode, a solo piano piece by Argentine composer Osvaldo Golijov.

From the Top showcases the talent of young classically trained musicians. According to its website, the program empowers these youth through “live events, NPR and video broadcasts, scholarships, and arts education programs.”

Paredes learned about the From the Top series from fellow musicians growing up, describing it as an opportunity for which many traveled across the country to record and perform. Several of her friends have also previously performed on the show.

“I went to The Colburn School before I came to CalArts, and they had a group of students in the high school program audition for From the Top,” she added. “[The show] had a bunch of our tapes, and they actually reached out to me like a year later, after I auditioned, and asked if I would like to be on this LA show they were having.”

Paredes auditioned with “Levante,” an upbeat Latin piece a world away from her classical background. A former teacher introduced the piece to her, and she was immediately drawn to the sound and how it moved her hands across the piano keys. Playing it in the studio for the other performers during the four days of rehearsals, she noted, was a fulfilling experience.

“Recording in the studio was definitely one of my favorite things that we did,” said Paredes. “It felt like we were recording an album or something, which we were, in a sense. It was a lot of fun, and it was such a comfortable space there too.”

Paredes, a pianist, cellist and vocalist (mezzo soprano), made her concert debut when she was 12 years old at the Glendale Youth Orchestra Concerto Competition. She was among the youngest winners, and the only member in the competition’s 28-year history to win for both piano and cello.

She has garnered an impressive number of accolades since—the Southwestern Youth Music Festival, the VOCE Competition and various Valley Arts competitions. She took home first prize in the 2016 Music Teachers’ Association of California Contemporary Festival and Scholarship Competitions. In 2015, Paredes performed alongside LA Philharmonic Concertmaster Martin Chalifour for Julie Andrews, an experience she considers one of the greatest of her young music career.

“I’ll always remember this—she threw her head back and started laughing when we started playing and clapped her hands,” said Paredes. “Just so genuinely happy about the music we were creating. It’s a memory I’ll always cherish because that’s someone I look up to so much. She’s an incredible singer and musician and actress. Incredible. And to have her react to what I was making, I was just so happy in that moment.”

Paredes’ From the Top episode will be available on its website after airing Sunday.