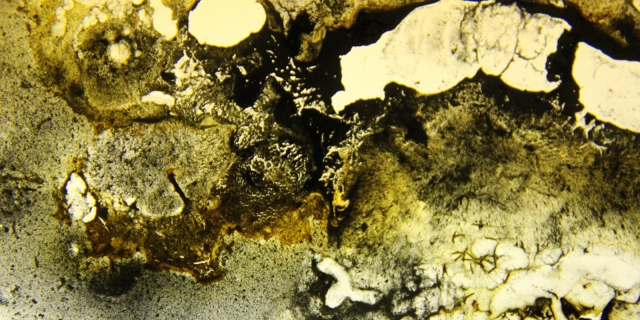 A still from The Tears of a Mudlark, composed of hand-made slides | Image: Charlotte Pryce

Filmmaker and CalArts School of Film/Video faculty Charlotte Pryce is currently on creative leave this semester, performing and screening her work internationally.

Born in London, but now based in Los Angeles, Pryce has focused much of her career on making experimental films and magic lantern projections. ARTFORUM describes Pryce’s work as “delicate, handcrafted celluloid miniatures that capture the beauty of nature and science through discreet cinematic techniques.”

Her latest performance project is The Tears of a Mudlark, a 20-minute science fiction fable about an outlaw, a scavenger and a visionary in the Anthropocene.  It relies on a pre-cinematic projector (the magic lantern), through which Pryce uses handmade and hand-processed slides and a single light source to create moving images. She attributes inspiration for the film to a photo from the 1940s she found at the Los Angeles Public Library. Depicting two women biologists who had discovered a frozen glacier with the remains of a swarm of grasshoppers, it sparked thoughts about strata, layers and legacy for Pryce.

While away from CalArts, Pryce has taken The Tears of a Mudlark to Rotterdam, Brussels and Paris, among other places. Frieze describes it and her other films as “haunted abstractions” imbued with “a sense of otherworldliness.”

Another recent project from Pryce is Pwdre Ser: the rot of stars, a six-minute short composed of 16mm film transferred to digital format. From the project description:

The film depicts an encounter with a mysterious, luminous, electrical substance. Inspired equally by medieval accounts of visionary experiences and by 19th century photography of the invisible, Pwdre Ser joins Kirlian photography with hand-processed images.

In an interview earlier this year, Pryce told film writer Jordan Cronk: “When I make my films, it’s just the film and me…but the magic lantern opens areas of production that are new to me. It’s more theatrical…the lantern performances offer a different world, one in which the audience is entreated to dream along, to listen to the unfolding of a story.”

In 2013, The Los Angeles Film Critics Association honored Pryce with the Douglass Edwards Award for achievement in experimental cinema, joining a notable list of fellow 2013 LAFCA winners such as Spike Jonze and Alfonso Cuaron.

Pryce will return to the CalArts School of Film/Video in the fall.