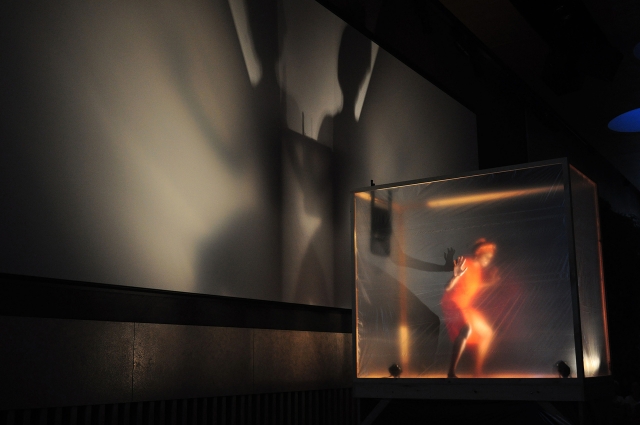 Okwui Okpokwasili, who is in dialogue with Christina Sharpe for Sublevel’s latest issue, in a performance of Poor People’s TV Room, 2014. | Image: Caitlin McCarthy

This week, Sublevel Magazine celebrates the release of its third issue, Stamina.

Based out of the CalArts School of Critical Studies, Sublevel was founded in 2016 by Maggie Nelson and Janice Lee. It describes itself as a publication “devoted to the nexus of literature, poetics, art, criticism, philosophy, culture, and politics.” Sublevel makes no hard distinctions between the creative and the critical, and instead focuses on highlighting work that is innovative, dynamic and hybrid.

The magazine is divided into eight feature sections that were designed by the original editors:

Each year, a team of student editors (led by managing editor Lauren Mackler) take part in the editorial process from start to finish – brainstorming issue themes, commissioning contributors and working with graphic designers to ensure a well-curated issue, both digitally and in print.

Stamina originated from an interest in engaging with the realms of sports and sex. Yet as it unfolded, it became evident that stamina was not an abstract idea found in the text, but rather an all-too-present necessity for a small team of MFA students striving to make the best possible publication. The editorial statement begins:

Stamina might be too big an idea to hold in one hand. No matter how hard we, as editors, have tried, it keeps seeping out of grasp. In other words, it takes stamina to think about stamina; a steadfast attention span, some prowess, and a sense of determination is required to wrap one’s head around what this mysterious ability to withstand prolonged efforts is all about. Where does it come from? Who does it belong to, who performs it, and where does its performance begin and end?

Upon examining each feature, it becomes evident that the multifaceted manifestations of stamina, and even the challenges to and/or movement away from stamina are what make the complicated idea such a fruitful theme. The lineup of contributors puts traditionally marginalized folks at the forefront, and invites the reader to question the limits of the human body. Stamina’s features and authors are as follows:

This past weekend, the Sublevel editors were at the Los Angeles Times Festival of Books and Printed Matter’s Art Book Fair with an excerpt from the latest issue printed as a zine. All eight features will be printed in the same manner and contained in a specially designed box. This printed version is available for pre-order but the contents of Stamina can be found online now at sublevelmag.com.