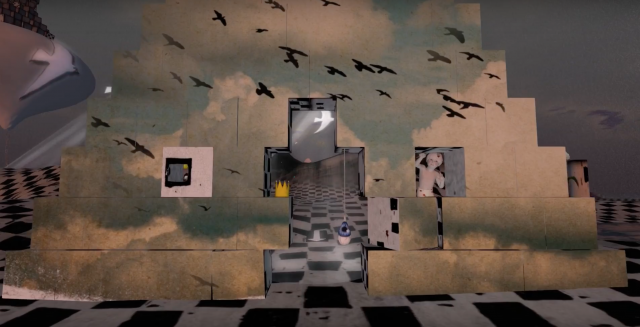 Since 2005, Erik Mondrian (MFA 19), a CalArts Interschool student from the Creative Writing and VoiceArts programs with a concentration in Integrated Media, has been an active resident of the online virtual world Second Life (SL). With anywhere from 700,000-800,000 active monthly users, SL is shaped by its highly imaginative and diverse global user base, who socialize, build environments and for some SL residents like Mondrian—use it to make art.

His thesis, For the Light of Other Shores, is a series of 10 short videos filmed in Second Life. The visual poems are introspective explorations of place, identity and desire. The filming technique he employed is known as Machinima, which refers to cinematic productions that use real-time computer graphic engines like video games to generate animations.

We had a chance to speak with Mondrian and learn more about his project.

24700: For those who are not familiar with Second Life, can you tell us more about what is it?
Mondrian: It’s an online virtual world that has been around since 2003. It’s basically a microcosm of the web but in a 3D environment. It has its own in-world economy and virtual currency. A lot of people will say, “Oh it’s a game,” but it’s not really. It’s a little bit more like a game engine. It’s a place where people can own parcels of land, build things and socialize. You move through Second Life using an avatar to represent yourself. For example, I’m a fox.

24700: What is Machinima filmmaking?
Mondrian: Machinima is an entire genre of filmmaking that takes place in real time within a game or virtual world. I am by no means the first person to do filmmaking in Second Life. It’s kind of like using the spaces that already exist as virtual movie sets. One of the most famous examples is from the game Halo. There’s a comedy series called Red vs. Blue where all the footage comes from the game. Even though they can’t control the characters that much, it’s still a pretty compelling series.

Second Life has the advantage where people have a lot more control. They can control their avatar, the way it moves and the environment. A friend of mine who’s in the UK, doing a PhD in Contemporary Art Practices, does filmmaking in Second Life and then combines it with non-virtual footage.

24700: How did your project get started?
Mondrian: This originally started because my mentor in creative writing, Jon Wagner, wanted me to do something that combined voice, writing and integrated media. This way my thesis could address all three of those areas that I was studying. Jon also co-founded the Creative Writing program at CalArts, and he’s talked about how he is eager to see projects that aren’t solely on the page. He also teaches contemporary and classical film theory, so I think he liked the fact that the texts I’d written ended up in these short films.

24700: What is your thesis about?
Mondrian: My thesis is trying to build up a sense of identity both here at CalArts and also in these virtual spaces and what that means. For example, in the first video, I wrote that piece specifically for that environment, which is the Cathedral of the Builder in a steam punk-themed city called New Babbage. The goal for everyone who lives there is to build. They’ve also created a fictional religion based on creating and building.

I wanted to film in this space because at the time I was asking myself, “What am I making? What does it mean to be making something?” And I tried to think and use that word, “make” and “making” in as many different ways as I could. The cathedral represents a sacred space where I’m lost but also seeking answers.

At the end of the first video in the cathedral, a little white fox, which represents me, shows up at the altar, and then doesn’t show up again until the end of the last video in the series. The fox is there to suggest a bookend. What I intentionally did was film when no other avatars were present. If there were others there, then I would temporarily de-render them so they wouldn’t show up. I wanted the environment to be absent of people.

24700: What is the significance of not having other avatars and wanting it to just be about the spaces?
Mondrian: I think it’s a reflection of my tendency to remove myself from the things I write. My writing tends to be kind of opaque. Without having a visual representation of who is moving through the space, it creates a disembodied feeling.

Below is an excerpt from Mondrian’s artist’s statement, which articulates the theme of human detachment from his films:

Place without belonging. Longing without love. A special kind of madness that comes from hiding in plain sight, seen but not yet recognised, heard but not yet understood. I move through time and space, observing all, saying far too little. What do you make of this? The lives you live, the memories, the moments—where do they go? Who do you find there? I’ve tried to make that journey here, tried to reconcile my circuitous wandering, outwardly aimless, with a destination that remains forever a step ahead, an optical illusion that pulls away even as it draws me forward.

For the Light of Other Shores will be on view at the CalArts Expo on May 9, 2019. The entire series is available online via Mondrian’s YouTube channel.