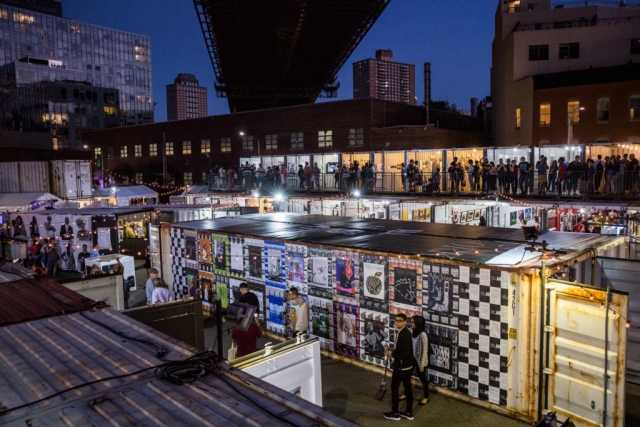 The Brooklyn-based photography exhibition Photoville comes to LA for the first time this year. | © Jessica Bal

Editor’s note — this post has been updated to reflect the addition of work by CalArts alum Brian Cross in Contact High.

Photoville — a popular Brooklyn-based photography pop-up exhibition — comes to Los Angeles for the first time in its seven-year history.

Taking place at the Annenberg Space for Photography in Century City this weekend and next, Photoville LA offers visitors a dazzling cross-section from the international photography community, including several CalArts alums and students. The event features multiple gallery exhibitions in photo cubes, lightboxes and repurposed shipping containers for Angelenos to explore.

Other CalArtians are also featured in group and solo exhibitions, such as Cassils (Art-IM MFA 02) and Brandy Trigueros (Art BFA 19).

Cassils (they/them) presents solo exhibition Becoming an Image, a photo series depicting the artist unleashing blows and kicks to a 2,000 pound block of clay in total darkness, illuminated only by the photographer’s camera flash. Cassils is an internationally-acclaimed visual artist known for their exploration of the human body as a social sculpture. Their catalogue of photography, sculpture, live performances and film draws upon feminism, body art, conceptualism and gay male aesthetics.

Trigueros is part of the group exhibition MADE IN L.A., a selection of vibrant street and fine art photography compiled and presented by The Los Angeles Center of Photography (LACP). Trigueros is an LA-based artist and photographer who explores womanhood, memoir and self-transformation through her lens. Her work has been exhibited in venues around the globe, including the Berlin Foto Biennale, the Los Angeles Center of Photography and the Building Bridges Art Exchange.

Running concurrently at the Annenberg Space with Photoville LA is CONTACT HIGH: A Visual History of Hip-Hop (on view through Aug. 18). The exhibition offers an inside look into the world of hip-hop photography, featuring original contact sheets for performers like Notorious B.I.G. and Jay-Z, rare videos, legendary photoshoots and memorabilia.

Renowned music photographer and professor Brian Cross (Art MFA 92), also known as B+, is a featured photographer in the Contact High exhibition. The Irish-born photographer has shot covers for artists like Damian Marley, Mos Def and J Dilla, and is cited as instrumental in documenting the early days of hip-hop.

His book It’s Not About a Salary: Rap, Race and Resistance (1993) was among the first to explore the flourishing hip-hop scene on the West Coast. Cross is also the founder of production company Mochilla, and credited on various music video and feature-length music films, such as Academy Award-nominated crime documentary Exit Through the Gift Shop (2010). Cross is also featured in the exhibition’s documentary and present at the opening night party.

Photoville LA and Contact High are free and open to the public.

Annenberg Space for Photography
2000 Avenue of the Stars #10, Century City