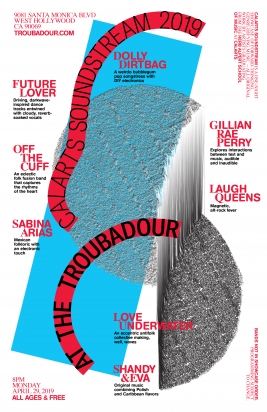 Tonight, (Mon., April 29), eight bands from the graduating class of The Herb Alpert School of Music at CalArts will perform live at The Troubadour, one of Los Angeles’ iconic venues. Soundstream 2019, an annual concert event, features an eclectic lineup of artists performing original music. The show is free and open for all ages, although reservations are requested.

Performers and acts include:

Shandy & Eva
Shandy & Eva perform mostly original, acoustic music across genres such as country/blues, jazz and pop. They released their first music video “Sunrise” last summer and are working on an album to be released in the coming months.

Love Underwater
What do you get when you put a harp in a rock band? In short, Love Underwater, a project originally started in New Brunswick, NJ, eccentrically mixing folk and punk. In 2018, the band released the EP It’s Alive! at 90​.​3 the Core.

Laugh Queens
Laugh Queens is the alternative rock project of SF-based songwriter Stephanie D’Arcy. Since moving to LA in 2016, D’Arcy has performed many shows with her band in which she plays lead guitar and sings. She recently released her debut album, Bathcolors, a sonic collection of thoughtfully crafted confessions.

Future Lover
Born out of a shared love of darkwave and industrial dance music, and a desire to perform live using hardware, Future Lover is the duo of Daniel Crook and Scarlett Perry. Crook creates intense beats and haunting synth lines, while Perry delivers somber vocals and melodic rhythmic guitar.

Off the Cuff
Off the Cuff is a five-piece band that brings together a variety of musical cultures in the creation of an original eclectic folk sound. The songs are written and composed by Chloe Levillant and Atticus Mckittrick and arranged collaboratively as a group.

Bands are not in order of performance schedule. Lineup is subject to change.