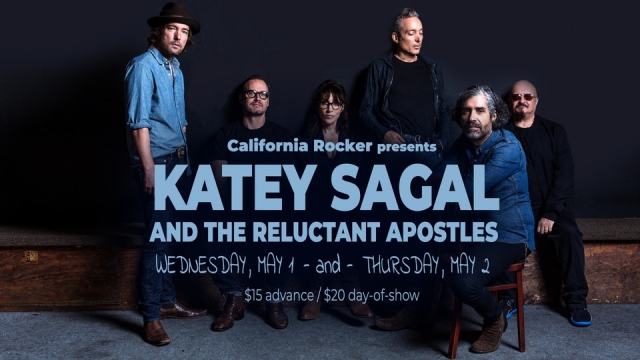 Katey Sagal and The Reluctant Apostles will perform an eclectic repertoire of specially chosen cover songs at The Mint | Image: The Mint Theater

On May 1 and 2, Katey Sagal (Theater 72) performs with her band, The Reluctant Apostles, at The Mint in Los Angeles.

Sagal began her career as a singer-songwriter, performing backup vocals for music artists like Bob Dylan, Etta James, Bette Midler, Olivia Newton-John and Tanya Tucker. However, she made herself a household name through acting, with roles such as Peg Bundy in Married…With Children and as the voice of Leela the cyclops in the animated show Futurama.

Katey Sagal and The Reluctant Apostles started as a the show’s “house band,” first calling themselves The Forest Rangers. The group was organized by Sons of Anarchy’s music supervisor Bob Thiele Jr., and they began recording covers and original songs for the hit series. Seven seasons later, they decided to take their musical collaboration into the world and have played shows across the country since.

The band’s description explains that they “perform only cover songs, bringing each member’s own individual experience to a carefully crafted repertoire of familiar and unfamiliar songs to which they have applied their our own unique interpretations.” They hope to preserve the long lineage of great songs and records that they grew up with.

The show at The Mint is presented by California Rocker, an award-winning online music magazine that describes the band as “Americana with a rock n roll edge.”

Tickets start at $15 and can be purchased on through Ticketfly.

Katey Sagal and The Reluctant Apostles